Not everyone has a mirror flat lake as in Switzerland and a motorboat driver who can put you directly alongside your crew to take perfect rowing video.

Most of us have to deal with waterways that are crowded, have curves and trees that interrupt your view from the tow-path.  That’s why the video camera doesn’t often make it out of its case until training camp but there are ways of getting more frequent feedback for your crew.

Here are four ways to use video that is still a good coaching aide within the limitations of your river or lake environment.

Do you have a bridge?

We did at one of the clubs I was working for and used it to great effect for before- and after- shots.  The coaches decided what it was that the crew was going to improve during the training session and the crew was briefed before they went on the water.  The boats were videoed as they approached and moved away from the bridge at the beginning of the outing and again at the end of the outing and the results compared in the boathouse.

This works really well for bladework and timing, keeps your coxswains on their best behaviour, is good for catching the odd-one-out in body positions and if you’re lucky as they go under the bridge you can catch the moment when egregious hand faults occur.  It doesn’t work as well for boat movement nor is it good for crew movement but it has an immediacy that longer videos often lack.  The crews really appreciated being able to see the changes they had made as well.

Or a big corner?

By setting yourself up at the apex of a corner you can get the same sort of approach shots albeit with changing angles as the crew goes past.  You’ll get some side views of your crews as well, maybe enough to determine slide ratios, certainly enough to spot someone moving at a different time to the rest.  A tripod helps even if it is a nuisance for the rest of the session and be patient: it takes time to master the zoom and focus and especially if the boat is hidden from view until it rounds the corner.

Or a big boat?

Have you seen the TV crews getting their close-ups of sweat on the brow?  They take a couple of people out of their seats and put the cameraman in their place.  It’s not comfortable but we all know that art is about suffering . . . a good coxswain might be able to do it without stroke and seven being in their place or take five and six out and put a little pressure on the bow four.  You won’t get the same boat movement as you do for a whole crew but you can focus on body positions or especially on the person directly in front of you.

And then there’s always the ergometer

It’s not real rowing but you can film from a stable platform, focus on one person at a time, getting side views and shots from in front and behind.  You can even set it up with a TV monitor in front of the athlete linked to the camera as you’re filming: there’s nothing more immediate than the athlete seeing the action as it takes place and as you talk them through it.

Please send me your questions about video by adding a comment below this post and I’ll try to answer them.

Raf Wyatt is a consulting rowing coach and has worked in New Zealand, Holland, UK and Switzerland. Working with Rowperfect UK she provides advice by Skype and email for club rowing coaches on how to improve their own coaching skills, training programmes and technique. 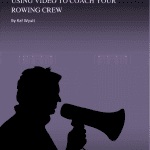 Video Analysis for Rowing – all you need to know

Posted on September 18, 2017October 28, 2020 by Rebecca Caroe
One of the best technique improvement methods for rowing, sculling and coxing is video analysis. It’s simple to… read more

Posted on September 1, 2014October 21, 2020 by Rebecca Caroe
Each month subscribers to the Rowperfect newsletter are included in a free prize draw to win one of… read more