Mentally strong people have healthy habits. They manage their emotions, thoughts, and behaviors in ways that set them up for

success in life. Check out these things that mentally strong athletes, coaches and coxswains don’t do so that you too can become  mentally resilient.

1. They Don’t Waste Time Feeling Sorry for Themselves

Mentally strong athletes don’t sit around feeling sorry about their circumstances or how others have treated them. Instead, they take responsibility for their role in life and understand that life isn’t always easy or fair.  So you didn’t do a perfect erg test – what are you going to do about it?

2. They Don’t Give Away Their Power

They don’t allow others to control them, and they don’t give someone else power over them. They don’t say things like, “My coach makes me feel bad,” because they understand that they are in control over their own emotions and they have a choice in how they respond.

3. They Don’t Shy Away from Change

Mentally strong athletes don’t try to avoid change. Instead, they welcome positive change and are willing to be flexible. They understand that change is inevitable and believe in their abilities to adapt.  They also try out new things because they might be an improvement.

4. They Don’t Waste Energy on Things They Can’t Control

You won’t hear a mentally strong person complaining over the music in the gym or traffic jams. Instead, they focus on what they can control in their lives. They recognise that sometimes, the only thing they can control is their attitude.

5. They Don’t Worry About Pleasing Everyone

Mentally strong athletes and coaches recognise that they don’t need to please everyone all the time.  They don’t always get to row with their friends. They’re not afraid to say no or speak up when necessary. They strive to be kind and fair, but can handle other people being upset if they didn’t make them happy.

They don’t take reckless or foolish risks, but don’t mind taking calculated risks. Mentally strong people spend time weighing the risks and benefits before making a big decision, and they’re fully informed of the potential downsides before they take action.  So if you choose to sprint early in a race, and risk running out of energy before the finish, they know they may get beaten but they also know they may win a close race.

7. They Don’t Dwell on the Past

Mentally strong athletes don’t waste time dwelling on the past and wishing things could be different. They acknowledge their past and can say what they’ve learned from it.  However, they don’t constantly re-live bad experiences or fantasise about the glory days. Instead, they live for the present and plan for the future.

8. They Don’t Make the Same Mistakes Over and Over

Mentally strong athletes accept responsibility for their behaviour and learn from their past mistakes. As a result, they don’t keep repeating those mistakes over and over again. Instead, they move on and make better decisions in the future.

9. They Don’t Resent Other People’s Success

Mentally strong athletes and coaches can appreciate and celebrate other people’s success. They don’t grow jealous or feel cheated when others surpass them. Instead, they recognise that success comes with hard work, and they are willing to work hard for their own chance at success.

10. They Don’t Give Up After the First Failure

Mentally strong people don’t view failure as a reason to give up. Instead, they use failure as an opportunity to grow and improve. They are willing to keep trying until they get it right.  Olympians frequently cite failures as their motivators.

11. They Don’t Feel the World Owes Them Anything

Mentally strong people don’t feel entitled to things in life. They weren’t born with a mentality that others would take care of them or that the world must give them something. Instead, they look for opportunities based on their own merits.

Whether they are working on improving their sculling or getting fit for the new season, mentally strong people don’t expect immediate results. Instead, they apply their skills and time to the best of their ability and understand that real change takes time.

Hat Tip to LifeHack for the original article.

Posted on July 30, 2013October 15, 2020 by Jonathan Malcolm Lewis
Our suggestions for quick rowing fitness gains As far as fitness goes, the best thing you can do… read more 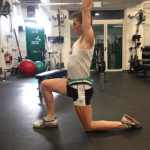 How can I increase hip tilt for rowing?

How a rowing club deals with lots of new members

Posted on September 12, 2012October 28, 2020 by Rebecca Caroe
The post-Olympic high has led to a flush of people visiting Rowing Club websites and asking to join.… read more