Here’s your weekly opportunity to enjoy tales from others who also love rowing. This weekly round-up is for a short list of interesting, in-depth articles for you to read over the weekend.

However, the world champion lightweights prevailed in a dramatic heavyweight coxless four’s championship. After jumping out to an early lead, the crew of Edwards, Beltz, Benjamin Cureton and Todd Skipworth fought to hold on to a slim lead over the cream of the men’s heavyweight sweep squad who were split into two different fours. Despite steering issues that hampered the Drew Ginn four early on in the race the crew reached a climax in the last 100m as they crossed into the lane of the other heavyweight four, who in turn collided with the lightweights.

The world champions held their nerve, untangled themselves, and crossed the line as winners. The two heavyweight fours were later disqualified.

Posted on August 30, 2016October 21, 2020 by Rebecca Caroe
What advice do you have for new crew (rowing) players?  I’ve been a competitive runner (cross country, track)… read more 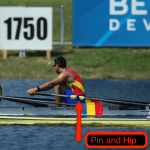 Boat set-up for the inflexible

Posted on February 7, 2018October 14, 2020 by Rebecca Caroe
Marlene Royle has some rigging tips for situations when you have an athlete who is not flexible and… read more

Posted on June 14, 2012October 28, 2020 by Rebecca Caroe
As watched on video by his team-mates of British Rowing.  So cruel – when they demand a slow-motion… read more