Get ready for the #WiSportCalendar 2015!

It’s been a fantastic year for WomenInSport and this year and WSNet has teamed up with SportsLiberated, the great magazine for women’s sport, to produce the 2015 calendar in a neat desktop (CD Case) format.  All through September you can tweet your nomination (and add a pix for more impact) and we will prepare a list of the top 20 nominations for YOU to VOTE on . . . and on 5th November we announce the TOP 12 for inclusion in the calendar.

At last, you have a chance to say ‘who’s who’ in women’s sport – alongside The BBC SPOTY, BTSports and SKY/Sunday Times sportswomen awards.  The 2015 edition will be supporting Breast Cancer Charities and will sell for around £5 including P P . . . so an ideal presy for mum, daughter, coach, teacher or team mate.

WSNet first launched a Sporting Calendar in 2011 – here’s some pictures of the launch – how #WomenInSport has come on!!!! But check out the pics and see who was supporting Women’s Sport back then!!!  Watch out for competitions to win calendars too!!!

Posted on July 28, 2013October 20, 2020 by Rebecca Caroe
A year ago tomorrow Danny Boyle and Frank Cottrell Boyce launched the London 2012 Games with a truly… read more 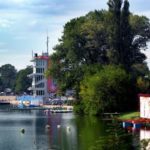 Posted on July 2, 2020October 13, 2020 by Bryan
FISA, World Rowing Association has recently announced the 2020/21 European racing calender! You can take a look at… read more

Posted on September 23, 2011October 22, 2020 by Spring
Even the sport of rowing is not immune to colourful fans – you know the ridiculous costumes sported… read more