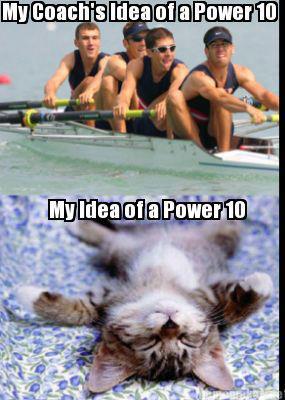 It is important to give your body enough energy to complete a training session as it was designed. Under-fuelling results in the last pieces or last minutes of a session being done on an empty tank. This puts greater strain on the body—you struggle to complete those last strokes effectively and with proper form—and can lead to injury as well as reducing the effectiveness of the session. Providing enough energy before a session (known as pre-fuelling) is essential to get the best out of yourself.

Many rowers train early in the morning and it’s a rush to get to the boathouse or the gym in time. Many forgo breakfast to save time, often with the belief that they wouldn’t have time to properly digest food anyway. With the body effectively having fasted for eight or more hours during sleep, energy stores are low and the metabolism is practically shut down. This is not a good place to be before a few hours of intense training.

A good strategy is to have something to eat as soon as possible after waking up for a morning session. This shouldn’t be a large, heavy meal but something small, containing carbohydrate, to kick-start your metabolism and provide some instant fuel for your session. Such foods can be eaten while packing your kit bag or travelling to the boathouse. You should aim to eat at least 1 hour before training and, ideally, have 1g of carbohydrate for every 1kg of body weight (for example: an 85kg rower should have 85g of carbohydrate).

Heidi Dietrich (a journalist and rower from Seattle) writes about how her change to early-morning eating improved her training:

“By regularly performing vigorous exercise without fuel right before and after, I was sending my body into starvation mode. My early morning metabolism was effectively going into hibernation”

“I’d been operating with a half empty tank, especially during those final race pieces or power strokes of the day. With my small early morning breakfast, I gained the energy to compete for much longer. […] It may make the difference between a half speed workout and a fully energized session.”
For sessions later in the day, a larger meal eaten longer before a session is preferred. Food should be eaten between two and four hours prior to training and should contain 1-3g of carbohydrate per 1kg body weight, as well as including some protein.

Sandwich (or similar) with Chicken, Cheese and Salad; Jacket Potato with Beans/Cheese/Tuna/Coleslaw; Pasta with Chicken and Vegetables.

Pre-race food should follow a similar strategy. Ensure meals are light and eaten 2-4 hours before the event. Consider low fibre foods to help with a nervous stomach.

One thought on “Tips on How to Fuel Your Rowing”

Posted on July 20, 2012October 28, 2020 by Rebecca Caroe
Here’s your weekly opportunity to enjoy tales from others who also love rowing. This weekly round-up is for… read more

Kinetics and Kinematics of Ergometer against On-water Rowing

Posted on March 31, 2011October 29, 2020 by Mohit Gianchandani
I would like to raise some comments and considerations regarding the use of ergometers for training. I have… read more

Posted on June 6, 2018May 20, 2021 by Rebecca Caroe
Each month subscribers to the Rowperfect newsletter are included in a free prize draw to win one of… read more