So you’re a coach! And like all coaches, you want a straightforward answer to an often asked, but very basic question, “How do I improve rowing technique?”

Let’s call it ‘Nose Theory’, a theory that utilises the great proboscis between your eyes as something more than a smelling organ. Without a nose, rowing could prove just as difficult as smelling – so this theory goes.

‘Nose Theory’ doesn’t go so far as identifying your nose as the ‘bow end or stroke end of your face’, instead, it proposes the nose as an ideal coaching tool, the improbable coaching reference. Your rower can be lead to technical proficiency by the nose.

The schnoz/sniffer/hooter is a standard reference point; it is always predictably positioned relative to other parts of the body, requiring neither rower nor coach to have qualifications in anatomy or physiology. Forget the need for an owner’s manual for orientation around the human body; we need only follow our nose.

It can be used to orient any rower’s position or direction: front to back, side to side, left to right, above and below, up and down. ‘Nose Theory’, in the hands of a good coach, can see the rower calibrated to a correct technical model.

A correct technical model in rowing acknowledges that structure and function are inseparable in the human body because function is dependent on structure. What a body can do depends upon how it is built. Putting your nose where it does not belong is possible but it means you are not going to function as effectively or efficiently.

Putting your nose where it DOES belong brings positive consequences.

Where does it belong? Well, firstly it belongs on the horizontal plain, between bow and stern, riding parallel to the surface of the water. This is an essential building block. With the horizontal axis as a constant, the coach can then begin to pick the nose that varies in height, speed or direction; it will not require anything as exacting as a spirit level, GPS or compass to gauge, just a coach’s good eye.

Let’s follow the nose and see where, with a few basic examples, it takes us:

A nose that loses height at the catch – the rower has over extended their body reach to achieve the length they failed to gain in the early recovery or they have poor compression in their legs, poor flexibility in the ankles, an inappropriate stretcher angle.

A nose that falls/dips at the finish – the rower has collapsed their core, rounded out their back, covered more of their seat or has simply opened out the body too much

A nose that moves forward and back over a shorter distance – the rower is too upright, not rocking over from the hips and has limited leg drive

A nose that is in constant motion – the rower has not stabilised their core at the back, is rushing forward again before fully completing the stroke

A nose that finishes in front of the handle – the rower has limited follow through of body and arms, an incomplete stroke

A nose that exhales on the recovery – the rower is applying questionable effort in the drive, is panicking or has no sense of rhythm

A nose that remains pointed down throughout the stroke – the rower is possibly slumped, has limited length, reduced breathing capacity, is not uniform to others or just very, very tired.

…and so it goes; the face is not the only place the nose can be central.

Some of these examples are exaggerated to demonstrate the scope of the theory.No doubt you can add many of your own and yes, although it pains me to say it…they may be as obvious as the nose on your face. 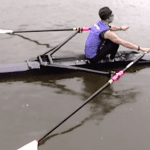 Sculling heel height above the waterline

Posted on July 2, 2018October 21, 2020 by Rebecca Caroe
For any single type boat, which is the most effective and efficient heel position with respect to the… read more