You don’t have to be the biggest and most powerful to win races.

So much emphasis is placed on ERG scores and size (height weight) these days as metrics for success in rowing. Well, the first of the NZ National races on Karapiro last Saturday should put a big spanner in that theory. Let’s look at the 3 main protagonists in the just completed premier men’s 1X race last weekend at Karapiro, New Zealand.

So which of these guys actually won the 1X final (and had the best times in all the heats)?

So, does size and absolute strength always win on the water? Apparently not. To be fair, Murray Bond have been training full time in 1X boats since October (longer than Mahe during this current cycle- post World Champs). However, given Bond’s time vs his partner Murray, something must be said for overall fitness and lightness. Physics tells us it takes more HP to move more mass. So it is strength-to-weight that counts on the water, whereas on an ERG just absolute strength matters (ERG’s don’t float). Then there is the matter of technique, but having not seen the actual race, I cannot comment on any of these fine points here. Row well happy holidays, Evan Snyder A Guest Post by Evan Snyder, St George Rowing Club, Auckland, New Zealand

5 thoughts on “The “best” rowers are not always the fastest”

Posted on November 25, 2011October 21, 2020 by Spring
Even the sport of rowing is not immune to colourful fans – you know the ridiculous costumes sported… read more 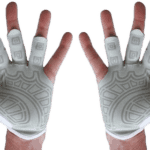 Posted on January 8, 2019October 7, 2020 by Tabhitha Tang
While the mark of rough, calloused hands with blisters may be the telltale sign of a serious rower,… read more

Posted on May 29, 2015October 21, 2020 by Amanda Wikstrom
When it comes time to select a bracelet rowing enthusiasts will adore the new collection of rowing inspired… read more