Following the discussion initiated by Rowperfect about British Club rowing is dying – can we stop the rot? We got a number of strong responses from clubs who echoed the problems and some who offered solutions.  one is Royal Chester RC and their captain Michal  V Palamarczuk gave us this exclusive interview.

If you enjoy your sport and want to give back to kids and adults who want to learn a new sport. If you can deliver enjoyment and fun and encourage the younger ones to aim for higher goals.  Then rebuilding a rowing club is the perfect environment.

Royal Chester RC has a current headcount of 250 active members of which about 80 are juniors, Masters number 65 and the rest are senior and senior women and social members.  It’s the oldest club in the UK – 1838 is the founding date and its has a royal patronage. Michal took over the captaincy 8 years ago and was captain for 5 years and at that point the club was on a downward curve in member count.  Michal put this down to a steady number of masters but poor attempts at recruiting senior men and women. The middle ground is a migratory problem – people aged 20-34 as they create their career paths – they go to university and they don’t come back to Chester Or their jobs move and that’s the world we live in today.

Michal took over as Captain from Keith Osborne (the Almanac editor) and started as a junior coach. Keith encouraged me to get involved and look at taking over his role encouraging youth to row. From there we created our “summer schools”.  These were for people coming along 5 mornings a week during the school holidays.  We charged a fee for local school kids. This was an already successful program but Michal saw the opportunity to leverage it to solve the membership crisis.

“I said we had to do 2 things – increase the headcount in the summer school and retain them in the club to create a continuity. he germ of the idea was sustainability and continuity.”
In the first year we opened it up by advertising more widely – posters in the schools, we met all the gym and PE teachers and advocated rowing as an all year round sport not just for an elitist few. They created the view that anyone can row (the facilities are there). The club has assets which are only used for 3 hours every evening and an asset value of boats $0.5million. 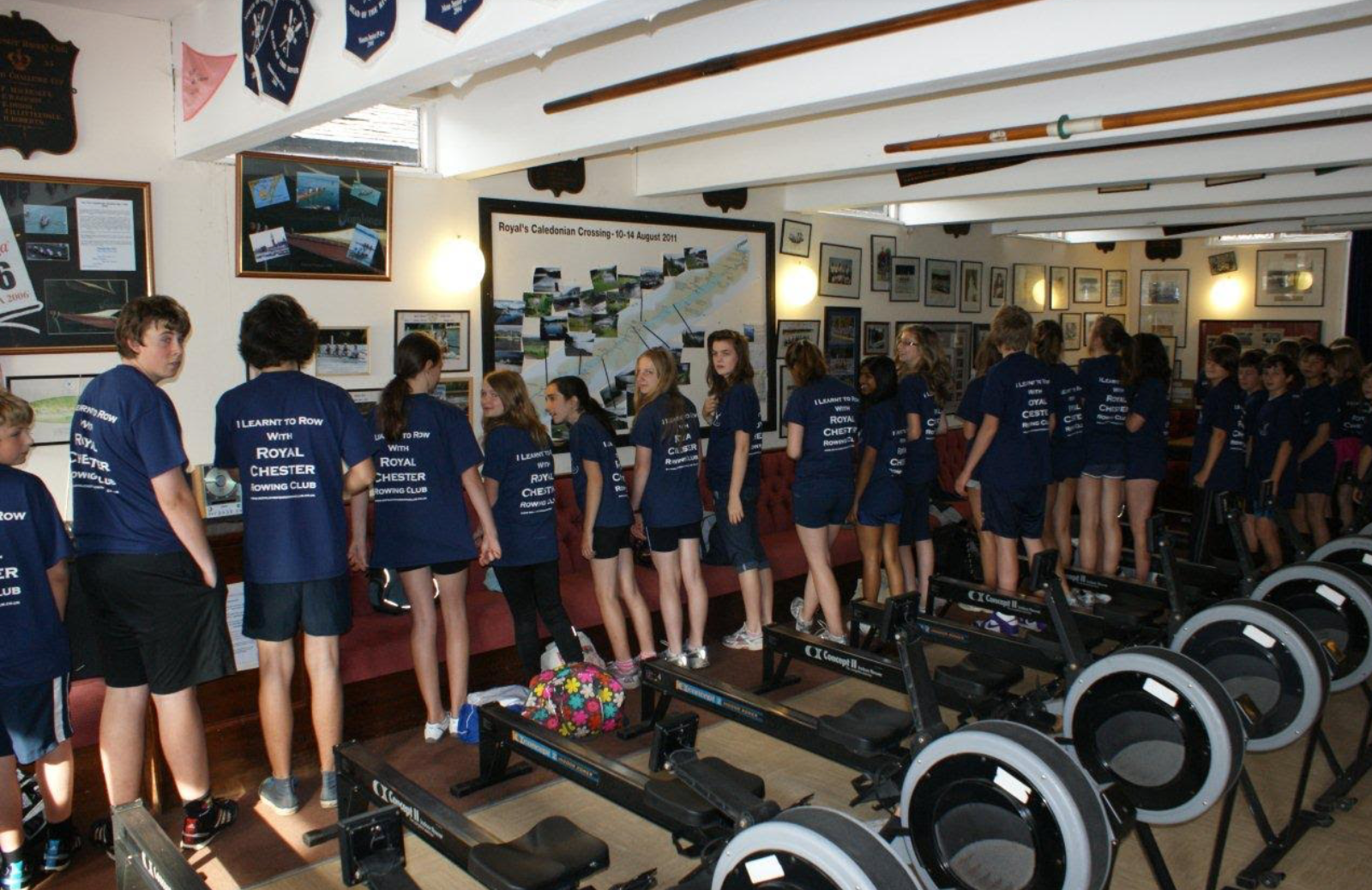 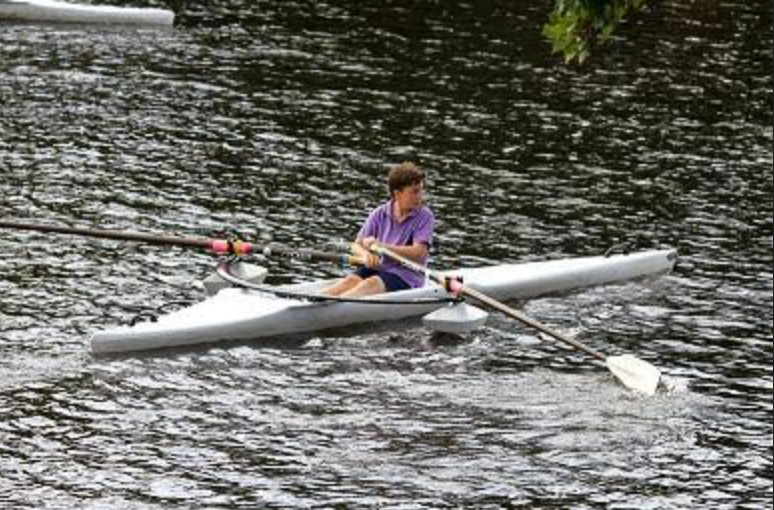 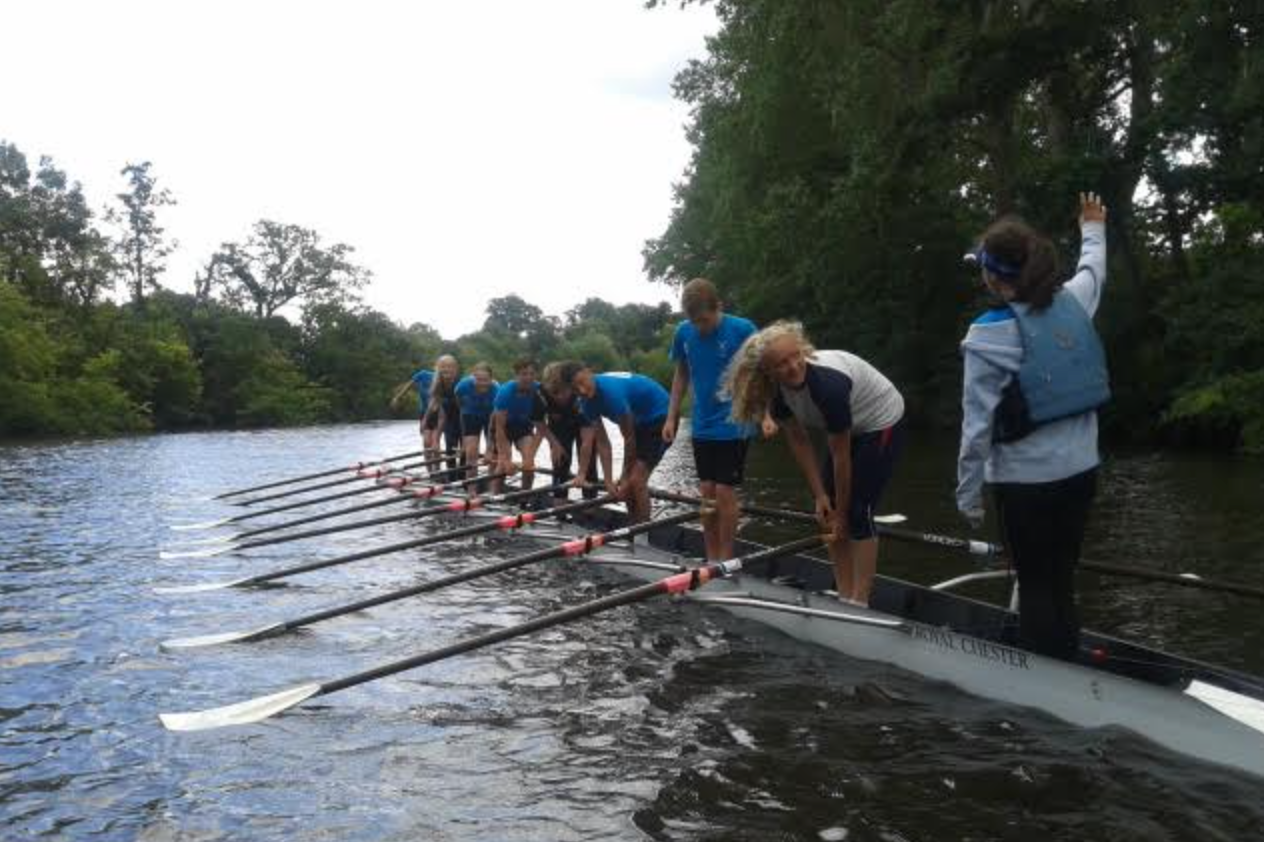 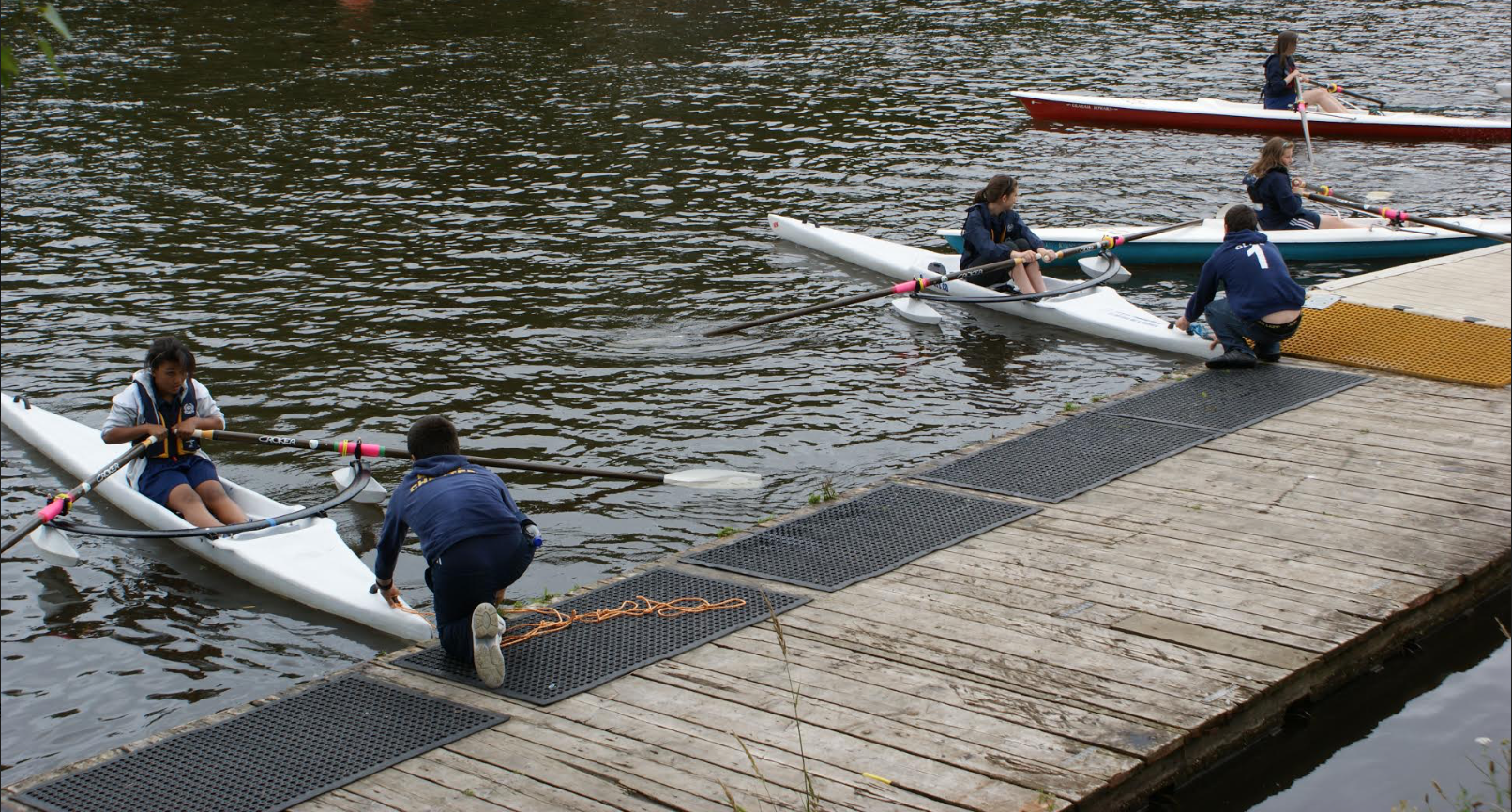 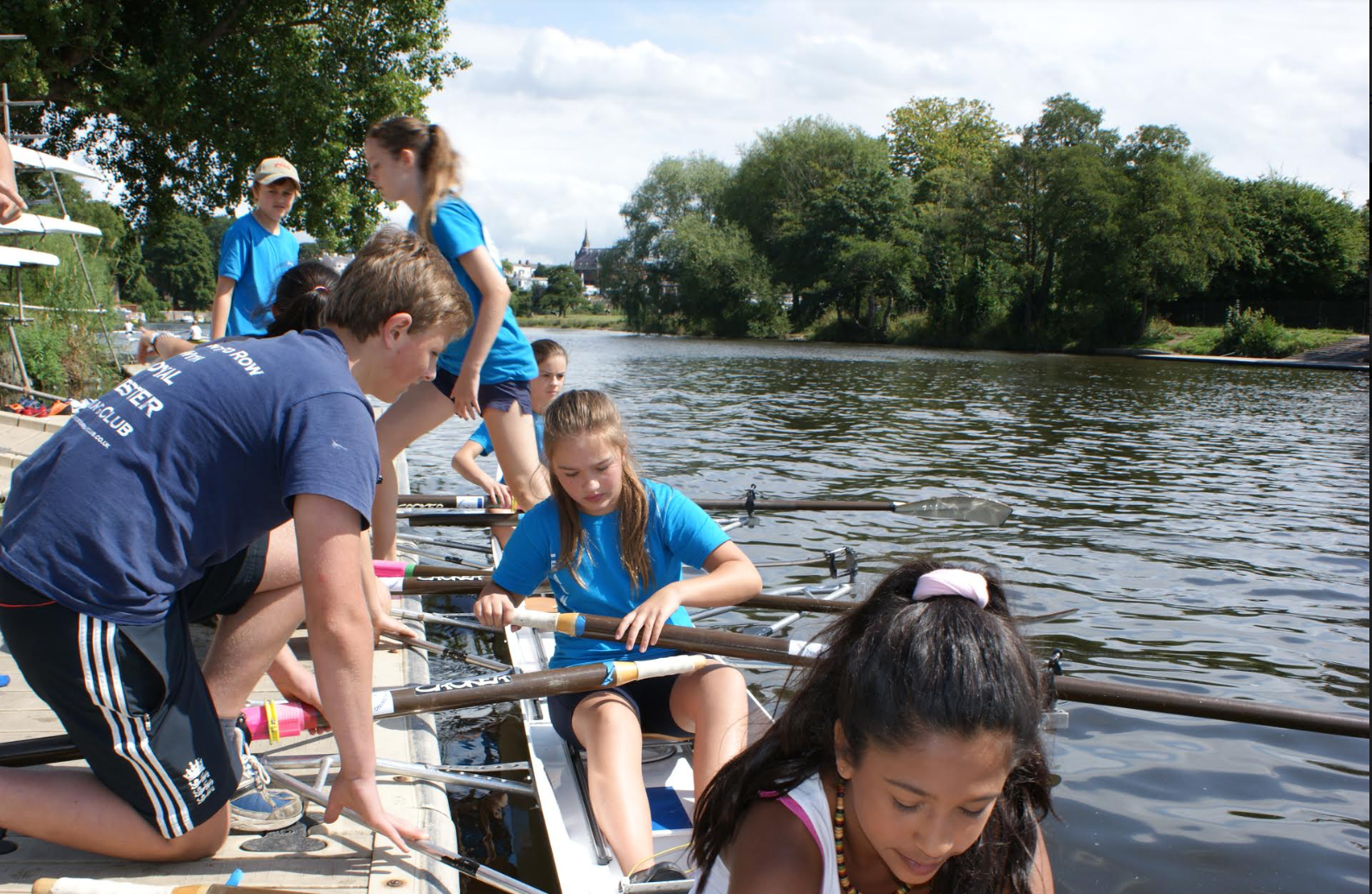 Getting fixed up Summer Rowing Camp 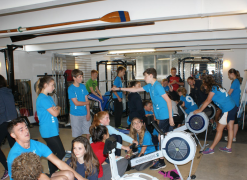 By doing this the club found that 3 mornings a week was OK but people didn’t get more than a taste for rowing nor achieve technical ability which they could recognise that they were capable of moving a boat by themselves. So they changed to 5 mornings and in parallel added more junior members and boat usage.  This made the club a more usable facility to improve participants’ technical ability and to create crews and squads by the end of one week.

Michal analysed what football and hockey clubs did for training camps. They got people along but they were charging a lot of money £200 for a week. We were on £35 for 3 mornings at the time – clearly under charging.

They doubled the price in year 1 and from there have increased gradually since – always giving more value – 5 mornings from 9am to 1pm including rowing, land training on ergos, and on the water coached on tactical skills like hand positions, respecting the equipment, getting in and out of the boat and then into play boats and into full singles and squad boats. There was a clear progression.

The entire Summer School had 3-4 coaches running it.  In 2017 the Club is now doing 5 weeks of Summer School with a different group each week. 100 people over that time period is the target.

A benefit they found is that the first week attendees repeated 1 or more weeks. The beauty of that is that their skill levels are going up dramatically and they can assist the new athletes and the coaching gets more refined. Over the last 5 years is the older kids aged 15-17 are experienced and they help coach.  We created Junior Leader roles and they are now teaching and helping us to teach the youngsters and mentoring the next generation coming through.

This process gives the kids a chance to sample the sport and to stay active in it even if they are not going to be Olympians. they are in the rowing fraternity and they could become coaches themselves in the future.

British Rowing have now created Junior Leader Courses. Michal gave a seminar to BR (slides below)and went through the process of how the Club succeeded. All the disciplines we create in rowing enables more participation in the sport in other ways. That’s were we have got to be. That’w how I think the sport should be going. Create the aspect of “all for the sport” and able to contribute even if they aren’t a top athlete.

Credibility is established by each child having a log book with information about rowing, and the club and Chester and the history on the Dee – they get a certificate at the end of the week.

Your club can copy the model

“You have to create a model – learn to row. What you get when you arrive, how you do the process, what you get at the end and can you become a member of the club at the end.

As we have been creating this model, we have also trying to redevelop the club house we are partnering with the Chester County Council, a local school and the club to develop a new building. Which will be fantastic, location on the river – but to do this we had to prove we needed to do it. I have been visiting local schools introducing taster days for kids who want to try rowing and with 3 schools we have made a route for youngsters to do curriculum rowing during the day while the club premises are empty. The beauty is some kids don’t do any sport and we introduce them and suddenly they can do something which is changing the mentality and fitness and obesity and other political agenda items which are part of what we are trying to encourage. Because we’ve built up the schools doing this, the kids come along to the summer camp as well and they learn to row better and it helps us when we have the groups to actually concentrate the training into non-skilled and semi-skilled people which takes the pressure off us.”

We have 2 avenues – developing sport and rowing for the general public as a non elitist and social activity sport.

It’s an income stream for the club. Unless you have income streams then British Rowing clubs won’t survive it is quite simple.

Without The learn to row we would be borderline not staying liquid financially. You have to plan and run it like a small business.

The Solution to Rowing Club Membership falling from rowperfect

Posted on July 20, 2016October 22, 2020 by Rebecca Caroe
It could be great if you guys at one time could do an article about club management systems… read more

Fun Ideas To Raise Funds For Your Club

Posted on October 23, 2018May 21, 2021 by Tobi
Every rowing club needs to raise funds. Whether its for a new boat or a new boathouse its never… read more