Another Concept in Sculling is the different Prime Roles of each hand:

This concept in coaching seems less known. Since both arms, and both sides of the body, have to accommodate the cross-over asymmetry, the fact is that each hand/arm has a different prime role during the drive phase and during the recovery phase.  The different roles for each hand should be identified and coached in order to achieve good sculling technique including a balanced boat.

Imagine a tight-rope walker at a circus with a long pole across his/her shoulders to aid balance as the rope moves beneath his/her feet.  With arms stretched wide along each side of the pole, the tightrope walker will use both hands in coordination, but each hand will be moving in a different direction in order to use the pole for balance control.   Similarly, in sculling, each hand has a different role during the drive and recovery phases, yet both work together to control the boat.

In this example, I will assume that we are sculling with the left-hand nearest the stern, as we do in GBR.  For scullers using the right-hand nearest the stern, it will simply be the reverse. The basic message is that during the drive phase, the right-hand is in prime control, and during the recovery phase, the left-hand is in prime control.  Why is this?

During the cross-over phases the left-hand is always above, and nearest the stern of the boat, so is effectively free, whereas the right-hand is always “trapped” underneath the left wrist.  The significance of the different roles of each hand is dependent upon whether the blades are in the air or in the water.

During the recovery phase, when the blades are in the air, it is only the left-hand which can stop the boat dropping to the port side.  It leads the recovery, and being free and above the right, it can bare-down on the handle to keep the boat level.  The right-hand, being trapped beneath the left, cannot contribute much during the cross-over.

An important coaching point to remember is that where you see an error, it will have developed in a previous phase of movement.  For example, on the recovery, as the hands and shoulders begin to open laterally towards the catch, you often see the boat beginning to drop-down to port – this is an important point of the stroke to coach.  The left-hand needs to continue to bare-down to maintain the boat level, but once the hands begin to uncrossed, the right-hand can also begin to contribute by reaching up more as the hands separate laterally.  It is so easy to just let the boat fall to port, rather than to pro-actively use both hands to re-establish symmetry of the body and maintain a level boat ready for the all-important catch.

Equally, during the drive when the blades are locked in the water, you see some scullers suddenly starting to use their right-hands to “wrench” their right-rigger upwards just before the extraction, in order to counter-act the boat dropping to port.  This is too late! The control by the right-hand should begin earlier, and more gradually. Of course both hands should work sympathetically together throughout the whole sculling cycle, but I have found that this concept of the left-hand being mainly in control on the recovery and the right-hand being mainly in control during the drive phase, has helped many scullers to master the “art” of sculling and to use the hands sympathetically to control the balance of the boat level throughout.  I would recommend more coaching focus on the role of each hand in sculling, as I still hate to see scullers racing with their boats dropping down to one side – especially internationals. 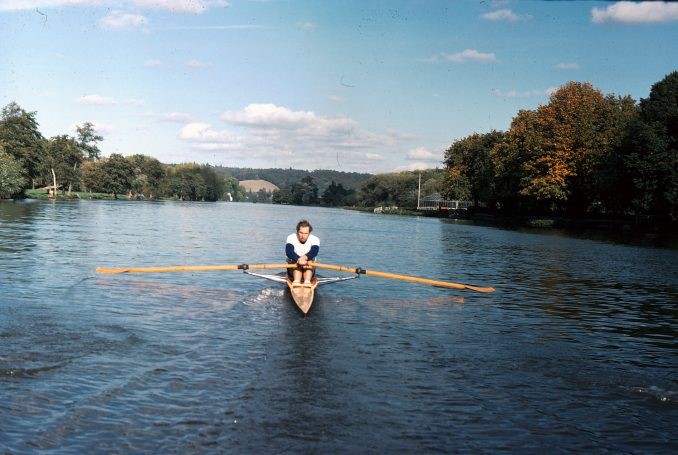 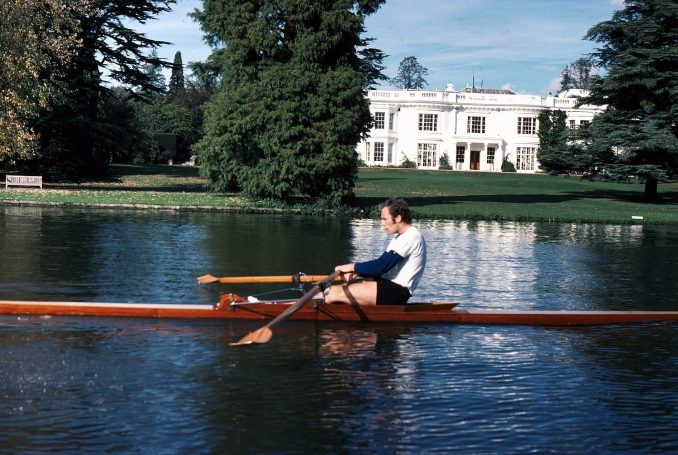 Note how low the rigger heights were back then, but also note that he definitely sculls with hands close, and with hands leading/following – Left-hand nearest the stern.

Peter Michael Kolbe – (DFR-M.1x – Lucerne – 1985). Sculling with hands above each other, and with the top top-hand nearest the body, instead of nearest the stern. (This I term “knitting”). Also note the very big difference in hand heights.

Lin Clark & Beryl Crockford – (GBR-WL.2x – Gold – 1985) – Note the variation of hand-positions during the drive-phase.  Lin, in the bow, with hands leading/following.

In our post on Saturday I will teach you more.
Enjoy Sculling!
Penny Chuter OBE,
Re-edited and expanded – June – 2020

Posted on June 17, 2013October 21, 2020 by Rebecca Caroe
Dashwood are a new casual rowing clothing brand based in Henley. We will have a large presence at… read more

Posted on January 13, 2015October 22, 2020 by Rebecca Caroe
Peter Mallory Rowing Chat guest We’re getting off to a fantastic new year with Peter Mallory as our… read more

How to use video with your rowing crews – Part 3

Posted on June 28, 2011October 23, 2020 by Raf Wyatt
Raf Wyatt continues her article series on how to use video as a coaching aide for rowing and… read more