The wind at Eton Dorney, as yesterday, is a moderate cross/head wind. It’s blowing from the island side (Lane 6) across the lake. The FISA Fairness Commission have decided that they will redraw the lanes for A B Finals to account for unfair conditions across the lake. Crews who qualified for the finals in the top positions will be moved into lanes 5 and 6. Lower qualifiers in the lower numbered lanes.

The Australian Men’s Four may now be at a greater disadvantage as they are drawn two lanes away from the GB crew after they paddled to the line in the semifinal to come second. 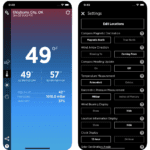 Posted on April 19, 2018October 13, 2020 by Rebecca Caroe
The Masters Rowing International Facebook Group had a great discussion on which are the best wind apps to forecast… read more