Quote from a discussion on rec.sport.rowing about safety…. much about other stuff but some clear points of view here.

Evidence that the oarlocks had any relevant part in delaying the rescue of the 2 inverted Germans in the World Championships at Dorney in August has yet to appear. Unfastening oarlocks to remove the oars has never been a part of any procedure for rescue of people trapped in their inverted shells. Were it so, then it would also be the duty of potential rescuers to ensure, before the event, that they were fully familiar with the range of oarlocks being used by competitive rowers to plan prepare accordingly.

OTOH, when something goes messily wrong, rather than blame any of the following mistakes: 1. The crew disabling or rendering ineffective their foot release mechanisms 2. The regatta committee failing in its duty of care to check what is, in the UK, a mandatory safety requirement for foot release 3. Both members of the crew unnecessarily foolishly laying back in the boat after their race thereby losing their visual horizon so precipitating their own inversion 4. Apparent lack of any clear procedure for rescue should rowers be trapped by a capsize – hardly an improbable occurence in an event where there has been the deliberate decision to _not_ check safety equipment – this prolonging the inversion with the potential for drowning 5. Failure of the rescuers to have familiarised themselves with the proper operation of equipment which, while recent, is hardly new.

All those fundamental flaws are instead ignored, while blame is planted upon a piece of equipment which was irrelevant to blameless in the chain of events which brought about the mishap whose sole safety function in rowing is to _retain_ the oar at all times against release, both under normal use in the event of accidents.

Posted on April 2, 2015October 28, 2020 by Tom Wall
Have you considered using analytical performance tools to improve your rowing and gain a competitive advantage? Are you… read more

Hyndsight – a rear-view camera for rowing

Posted on November 24, 2014October 28, 2020 by Rebecca Caroe
Ever wanted a live stream video in your boat to see what’s in front of you? Hyndsight CRUZ… read more 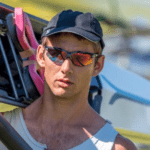