We all want to know the deep secrets of top rowing coaches.  Surely they must do things that “normal” coaches don’t do? Charles Simpson is the co-author of Advanced Rowing and shares his deeper thoughts about rowing, life and how to become a better rower and coach. 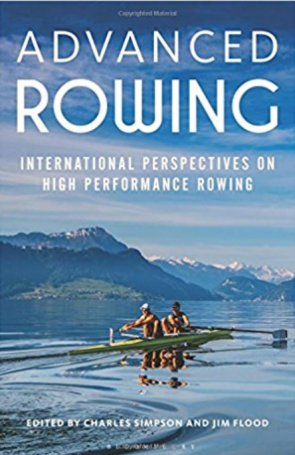 Why did I choose to write this book?

Noel Donaldson and building flexibility into the training program

How do we get better at asking questions to develop understanding ???

What would a club coach take from the book?

Summary of the Chapter themes:

Noel Donaldson – Very organised and disciplined training approaches…..lots of support staff, other coaches and athletes feeding in to the system….Geographical isolation is a challenge b/c it limits their access to top competition……..use of dynamic and static ergs to add variety to training (including Rowperfect).

Johan Flodin – one of two full time national team coaches in Norway BUT they make good use of Olympiatoppen staff and especially cross country ski experts. Take many training camps…..  treat technique on the erg as an important issues (while Noel says he sees the erg largely as a conditioning tool)…1000 hours per year of training and 125 km of rowing average week.

Simon Cox – Swiss (now Czech republic)………..setting up a national team system which clubs buy into……….a centralised system……………working with club coaches/meeting with them………Lots of variety in training location and CC ski camps as well as swimming camps, cycling camps, erg camps (which was partly used to bring on new talent into the national team system)…… Building athleticism into the training of the wider body of rowers in Switzerland (e.g. adding weight training).

Tom Poulsen – View that using weights could have helped him set an even faster world record but only by 1 second perhaps…..Use of weights…………Small centralised system……..willingness to work with local universities to make projects…..limited training facilities……camps……taking boats to Copenhagen harbour…use of both C2 and Rowperfect ergs…..very democratic,…..the lightweights were really left to figure out how to make weight and athletes could be 3.5 kg over the male limit 24 hours pre-race….

Ben Lewis – Talks a lot about what he learned as a rower at Oxford Brookes from Richard Spratley…..developing an ethos of hard work….Helping guys who have full time London jobs to find time for rowing = efficiency in time use…..”row as much distance as possible within the time” – keeping intensity down to hit the weekly volumes……

Dave O’Neill – The coach as an educator – holistic – developing mindset, culture, tradition, being part of a BIGGER Texas project (athletic department) – INCREDIBLE financial resource  – selection is something that is happening every day and he works hard to be transparent to athletes – writing up the results….…..

Mark Fangen-Hall – Fair but not necessarily equal – best boats go the best athletes….elite culture….REWARD EFFORT NOT RESULTS…..weight adjusting erg scores….lots of levels of rowing in the club…..Not seeking to be the athlete’s friend…

How to use video with your sculling crews – Part 4

Posted on June 23, 2013October 28, 2020 by Rebecca Caroe
Rowperfect RP3s have been bought by many of the top countries competing over the weekend at Eton Dorney.… read more

Posted on July 2, 2018May 20, 2021 by Rebecca Caroe
Each month subscribers to the Rowperfect newsletter are included in a free prize draw to win one of… read more