LIKEaGIRL – Getting to the core of Activity Sport – the fundamentals for girls’sport.

Two leading thinkers from the sport of ROWING will be speaking at the #LIKEaGIRL conference.

Sarah Winckless – will be setting the scene around ‘what’s wrong with girls’ sport Ryan Demaine – will be advocating the importance of teaching girls  CoreFIRST in all sports BEFORE competitive sport.

Why not join us and find out why girls throw ‘LIKEaGIRL’?

How it impacts their approach to sport how can teachers, parents coaches might bring about change?

Issues ranging from body image to core strength and confidence will be discussed  to evaluate and ameliorate the disconnect, avoidance and drop out from sport which occurs amongst young girls.  Strategies for schools, clubs and parents will be expounded which help engage girls in getting active and overcome fear of judgement

Sarah Winckless is a former British rower. She won a bronze medal at the 2004 Athens Olympic Games, and was twice world champion, in 2005 and 2006. She is Patron of the Scottish Huntington’s Association was Chair of the British Olympic Athlete’s Association from 2010 to 2014, and was Chef de Mission for the Youth Olympic Games 2014.  Sarah speaks regularly on motivation through sport and advises on leadership in business. In 2015 she was awarded an MBE for services to Sport and Young People.

Ryan Demaine is Director of Sport at Headington School, Oxford and is committed to a broad understanding of Muscular-Skeletal control and Health-Related Fitness as part of a girl’s engagement in sport and lifelong wellbeing. He has applied this to a range of sports at Headington with extensive success at both engagement and international levels.

Posted on August 9, 2018October 15, 2020 by Rebecca Caroe
Thank you Rowperfect and Faster Masters for giving me stuff to read that made my hairs stand out.… read more

Space between hands at the finish when sculling 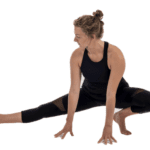 Posted on April 27, 2018October 13, 2020 by Rebecca Caroe
Sophie Mackenzie runs through her chosen stretches for rowers who have tired legs and tight muscles.  This is… read more