The Les dieux de l’Aviron Calendar (Gods of Rowing) is the rowing version of the famous French Rugby Dieux de Stade (Gods of the Stadium) calendar.

The Dieux de Stade calendar was originally created to raise money for charity, but has now been credited with the increase in popularity of the French Rugby team, Stade Francais.  It follows in the footsteps of the famous Pirelli calendars.

Photographed annually by Professional Photographers this calendar is known because it features 12 months worth of nude French rugby players.

The images for the 2013 Calendar were captured by photographer Brice Leclert and feature 12 months’ worth of naked male rowers.  This is definitely one for the ladies!

The images were captured across the showers, locker room, dock, boathouse, gym and on the water.

If this calendar sounds like your perfect eye candy, then you can find it in the Rowperfect Shop. But get in quick, we only have 10 copies!

Here’s a small preview of what goes into the calendar!

Also in the lead up to Christmas we will be giving you even more ‘previews’ on the Rowperfect Facebook page.   Each day we’ll release one of these fabulous pictures – something to liven up your lunchbreak.

So, if you haven’t already connected with us on Facebook, now is the perfect time!

Is Rowing “The Hell of Togetherness”?

Posted on October 21, 2014October 21, 2020 by Rebecca Caroe
As an image of the hell of togetherness, rowing takes some beating: mesmerically repetitious, shatteringly hard work, and… read more 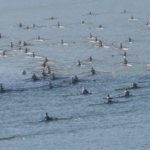 Armada Cup – the end of a Swiss institution

Posted on February 7, 2019October 7, 2020 by Jo Barber
Armada Cup in Switzerland There are thousands of regattas in the world with as many rowers. But there… read more

Posted on November 20, 2013October 22, 2020 by Rebecca Caroe
Everyone who’s on our newsletter list from Monday 25th November will get a discount code to remove shipping… read more