This month we’re conducting a 1 hour interview with world renowned rowing coach – Jim Dietz! Register below and ask him a question of your own.

Jim Dietz is a world renowned USA rowing coach and adviser with heavy Olympic and World Championships experiences as both a rower and a coach. His incredible life in rowing began with him sculling

in high school, soon taking away the first Junior World Championships single title in 1967. His career continued to grow from there while he raced as a member for almost every US National Team from 1967-1983 (including Olympic games in 1972, 1976 and 1980).

Since then his attention has been drawn to coaching! Very soon his coaching exploits had earned him recognition. One of his more notable roles was coaching the Minutewomen from the University of Massachusetts to seven consecutive Atlantic 10 team championships (including the 2002 crown). His success doesn’t end on the water, though, as his program has produced a league-leading 17 Atlantic 10 Academic All-Conference performers, eight Collegiate Rowing Coaches Association National Scholar Athletes who have earned a total of 11 citations, and four US Rowing Association Academic All- Americans. In addition, his teams annually lead UMass’ Atlantic 10 Commissioner’s Honor Roll selections.

Past coaching, Jim has spent much of his time creating various groups to support the world of rowing. One such group was the Thames River Sculls, a non-profit sculling center producing members that’ve won numerous titles at the US Scholastic championships.

Posted on August 3, 2013October 15, 2020 by Tobi
Firstly healing the callouses. Soak hands in warm water. Soap vigorously when the skin is softened and warmed… read more 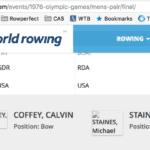 Posted on August 21, 2018October 15, 2020 by Rebecca Caroe
Sometimes we get laugh out loud moments from Rowing Crew names.  When doing regatta entries and you are… read more

Free shipping till Sunday – get cracking

Posted on December 10, 2014October 22, 2020 by Rebecca Caroe
Get on with your Christmas gift shopping and take advantage of Rowperfect’s Free Shipping Week in our online… read more