I was recently in Austin, Texas, and approached the local club to borrow a single. During my visit I was introduced to Charles Barksdale the energetic coach who has helped to build a very successful and inclusive local rowing community. Charles does two jobs and each job is different he works as a Boatman on the University of Texas Varsity Programme and takes care of the equipment, tune up rig, repair and drive the trailer and as the Head Club Coach, at the Texas Rowing Center, he says,This job allows me to coach. My philosophy is to try to get as many people out on the water as possible.

What is your background in the sport? I have been rowing since 95 and coaching since ‘98. I wanted to be a better rower and so I started to coach. Now I am a better coach than I ever was a rower since I am not an body shape but most importantly, I still love it.

When I started the first things I learnt that no one way is right. Every athlete is different and the most interesting part is that no matter who you are dealing with you have to find a new way to help them fix the problem. Look at their background and manipulate your coaching to get them to do things. This keeps me on my toes and so I am never stagnate and I never do the same thing twice.

What are the differences between the groups you coach? Coaching kids you want a quick session, on and off the water fast. give them a lot of information they figure it out themselves.

By comparison, masters (veterans) want to know everything they are constantly asking why am I doing this? Masters keep me on my toes the kids are the second hardest group to coach because they have parents!

Open athletes you coach you give suggestions. They are wrapped into coaching themselves you are not training them just moulding. If they get the right answers from you as a coach they will go and find another coach. Open rowers sometimes have 6 8 coaches because they take what they want from each one. I usually advise them, Go find out what works for you and tell. I need to know. I am a two way street If you dont ask me question it is hard for me to tell what you need. 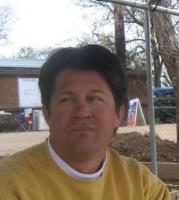 What are the local facilities in Austin for rowing? We have three public rowing clubs and 4 college clubs and the high schools run programmes from within the public clubs.; 150 children row competitively. This lake [a dammed part of the Colorado River which runs through the middle of the city] is 6 miles of rowable distance and no motor boats except for coaching launches; we get spoiled. It is a wonderful lake. We are working on reducing launch wash by moving all the launches to double hulled designs. You can row all year here. We get visits for camps during Winter Breaks from the universities of Michigan and Kansas. Lots of people come here to visit.

We can row 350 days a year here. There was a flood this year for 3 weeks but that was the first time for years. There is virtually no flow the wind is more is more predominant. The river bends and so generally you can find a flat section even on a windy day. We have a 7 lane 1,000m course at one end of the lake and can manage 2,000m for 3 lanes at the other end.

What is the local climate like? In the summer at 5 am it is 85 degrees in August….and so we practice early in the morning.

What is a club coach job in the USA like? I started at Texas Rowing Center 4 years ago. The job is more than just coaching, I get to be big brother, father, confidante. For example one guy had a bad divorce and rowing saved his life and turned him round. It is really fun because you see this a lot. One of the other satisfactions is seeing children that you have coached get scholarships and there was no other way they would go to college.

I do quite a lot of the club administration including a weekly email newsletter. I also run the Lone Star Rowing Association which brings together all the clubs in Austin. We deliver high performance clinics, and learn to row sessions it is all about collaboration and keeping it low cost. Together we are trying to do safety stuff for the lake. For example, we go to the city authorities as one voice asking for support. Currently we are working on buoying the hazards and putting right of way markers on the bridges. We also get improved collaboration at the regattas one club runs it and everyone adds volunteers.

Every month the Association does a scratch regatta over 1k and accurate timing and you line up against someone good for good race experience.

Our rowers live up to 30 miles away. This is quite a rural area. We are trying to get more children from the city projects and the lower income side…people come from everywhere.

Do you have any advice for other cities with more than one club? I think the trick is to get people to work together with a willingness to sacrifice and compromise. Look at the big picture…. some people are too selfish on their programme needs.We are all here to do the same things. We try to have a meeting once a year with representatives of all the clubs. We didnt need one last year because there were no problems! We couch it around safety and then we move on from there to other things like talking to the City [authorities].

Last year we were recognised by the City we had Austin Rowing Clubs Day and Texas Rowing Centre day and this was great Austin is trying to be a fit city the Mayor and Governor do 5 km races. Texas has 2 of the most unfit cities in America. We have this trail around the lake and 1.5 million people use it over a year; only about 700,000 people live here.

The university has their own priorities and but they still help out.

One name I hear mentioned a lot are the Simpson family. So how does a family from the UK become Austins local heroes The Simpson family moved here from the UK 15 years ago. 1995…. Maureen Simpson coached the ARC and as her forte was when you got in the boat you were put with the right crews and she fast-tracked people. We got sent to US Masters national championships in our first year rowing! She got me into coaching… and sent people to the right coaches. That is a real skill.

Chas Simpson has an amazing knowledge of coaching and rowing. He was a great athlete, with his brother, Philip, they did a lightweight double scull and they have beaten heavyweights in a double. They still visit every winter and catch up with everyone and coach a bit and hang out with us. It is like getting a recharge and fires everyone up about rowing all over again and then they move on.

[Maureen Simpson worked for the ARA in London for many years, coaching at Imperial College and Hampton Roads Rowing Club, USA. Her son, Charles is currently Coach of the Year and is at Reading Rowing Club.
I held a conference and Chas was a speaker and so generous, he gave his email out offering training tips and advice for anyone who wanted to ask.

Tell us about your annual Clinic and Conference [a clinic is a training camp]. We hold one per year and will move to two soon. 50 rowers come with their boats and some with crews ]; others just to jump in to our crews. Some are serious people and some dont want to compete. Some are Olympians. Some just want to do it better this is wonderful. We offer camps for kids to learn to row. This year they are doing a camp for Canadian Henley and we take the top 2 boats to the regatta. One month training and then they go to the regatta.

Clinics are limited by numbers because we are now so popular. We let prior attendees first and then locals then people from nearby cities like Dallas, Houston as well…. we would like to be bigger we have a 1 to 4 ratio of coach to athletes and it works well.They train twice a day and in between lectures, videos and erging. People arrange their own accommodation or stay with other rowers…. we get some donations. It is held in January because the boats are not in use in other clubs where their rivers are iced up.

We also offer scholarships to enable talented athletes on low incomes to attend. There are four in every clinic and we give them to each Austin club who hands them to whoever they want. Hopefully we can use that to bridge the gap between the clubs.

Duncan Holland is BACK – blog updates from Switzerland

Posted on October 19, 2018October 15, 2020 by Duncan Holland
It is five in the morning and I am sitting at the computer in a borrowed apartment in… read more

Posted on November 9, 2009October 29, 2020 by Rebecca Caroe
Barrie Robinson the inventor of the OarRATER rating watch has got a nice review in NZ Rowing Magazine… read more