How do you use Rowperfect in your coaching?

On the Rowperfect we link the handles together so you feel the pull on the flywheel as part of the drive sequencing.  As the load of the flywheel adjusts from legs to body/arms… if someone is opening up their shoulders off the front or if releasing their gluteus maximus early – you can tell.

As coaches, we use this as an affirmation to back up what you have seen from the boys rowing.

It takes a bit of practice but we now we go for up to 30 minutes with them.

Do you use the RP software?

What works well is that without a number on the screen we get a technical focus.  When we do 3 x 15 minutes and rotate everyone n the group through the RPs so we get everyone to have a go.  [The school has 4 original RPs which they use linked together.]

The Rowperfect has no numbers and the good thing is they focus on technique and it helps reinforce [the technique] without external factors of stability and environmental conditions.

We are looking to upgrade ours and purchase new RP3s…. we only put monitors on every couple of sessions – to reinforce the pick up and drive. 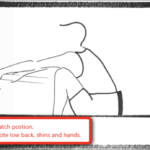 The catch in rowing technique

Posted on September 25, 2018October 15, 2020 by Rebecca Caroe
The catch is the placing of the blade in the water at the end of the recovery. The… read more

How to row faster with just 30 minutes training

How to improve your rowing 1% this season