Eton College has had great success in school rowing over recent years, winning all before them in 2009 including UK Schools Head, the National Schools Regatta, Henley Royal and Head of the Charles (Boston USA).

Alex Henshilwood,
who coached these crews, used the Coxmate SCT and has written the following article about his experience:

Etos top crews have used the Coxmate system in training and competition since 2006. I take it for granted that the system will amplify the coxswains voice, and provide generic time and stroke rate data like other units do.

However, where the Coxmate excels is in its ability to provide accurate boat speed from GPS, and to log the information for download to a PC.

This has a number of advantages.

Firstly, I can extrapolate prognostic times to provide boat speeds for various training rates and intensities. This is a very good way of measuring progress throughout the training period, and for keeping school athletes honest should they fail to generate the right boat speed. This idea is nothing new, but by using the real time speed function on the Coxmate the coxswain can inform the crew immediately, stroke by stroke if need be, if the right times are not being generated.

It doesnt take long to see an improvement in boat speed. Provided your prognostics are accurate, when the crew hits the right speeds in training then confidence levels increase.

One of our training locations is un-buoyed, still water. Being able to measure distance pieces and get accurate speeds over these distances is excellent.

Working to boat speed as a key measurement also teaches the athlete about their own physical limits leading onto the second key function of the Coxmate: helping to establish a race plan and seeing if the crew can execute it effectively. Training data provides key information about boat speeds, but measuring an entire race puts the coach right inside the boat. Rather than subjectively guessing when the boat slowed or increased in pace, the coach can show the athletes and reinforce what went well whilst pinpointing when things went awry.

Furthermore, this can often be linked to a specific period in the race when the rowing was better/worse (the Coxmate can show you this too). When faced with objective data it is hard to argue against it which then provides a greater clarity of purpose for all in the crew.

I often download data from my Coxmates to my laptop in order to evaluate heats prior to tweaking the strategy for finals. Key questions like did the rate stay too high for too long?, or did the sprint finish actually increase boat speed? can be answered accurately and addressed in the next race.

When a plan is successful and the race won, printing out the data, displaying it at the boatshed for all to see how a particular crew triumphed is a great way to praise, motivate and encourage the whole club.

Eton Colleges first eight had a perfect season this year. The crew recorded consecutive wins at the Head of the Charles (Boston, USA), the Schools Head, National Schools Regatta and Henley Royal Regatta in the 2009 season. The Coxmate systems used in training and racing provided an advantage that nobody could match, and we will use them again in the new season. 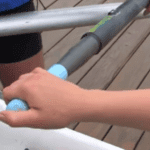 Feathering on the recovery

Posted on August 27, 2018October 15, 2020 by Rebecca Caroe
Feathering on the drive and feathering into the body is the subject of this “dock talk” by Marlene… read more

Finishing strokes -one last thing for your rowing video

Posted on June 18, 2018May 20, 2021 by Raf Wyatt
Just every now and then you get the chance to compare two styles of rowing within the same… read more

Posted on June 11, 2018October 20, 2020 by Rebecca Caroe
Usula Grobler is both new to rowing and is coached by Carlos Dinares, an avid RP user.  She… read more