My sojourn in Zurich continues and I am well settled into the club at life at Belvoir now. The immense difference between Lauder and Zurich

has encouraged my idle thoughts to turn to other differences. One thing that I have immediately realised is that I have forgotten that full-time rowing coaching is hard work. In my other life as a farmer, caretaker, housebuilder and very part-time coach back in New Zealand I thought I worked hard. However 2 weeks solid of coaching here have reminded me of how it is to coach 7 days a week.   The day to day responsibility for the performance of a large group is also a shock to the system. Many on the outside don’t see coaching as a real job; trust me, it feels like one here.

My current top focus is selecting and preparing mens and womens eights for the Ellikon Eglisau long distance race. This is a head race over 11km of a most 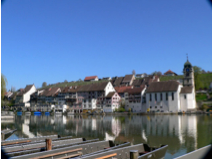 picturesque reach of the Rhein north of Zurich. This is a stretch I know well from four years of coaching Seeclub Zuerich who have a shed there. In parts one bank of the river is in Germany and one part in Switzerland. I remember going for a run from our clubhouse one day and heading off through the forest and while coming back being somewhat surprised to find that I was on the wrong side of the border and had to go through a checkpoint in running gear with no passport or id of anykind. Kiwis are isolated from the world in many ways and the 2000km between us and the neighbours serves well to keep us free of such annoyances as id documents and border police in our daily lives.

Both our eights are coming together well and had a good weekend’s training. With the men I spent a lot of time working on the difference between rowing an eight and rowing small boats. Most training at this time of year is in the small boats and on ergos, and the athletes forget that rowing an eight is different to rowing the slower types and the rhythm of the strokes needsto change. . The eight is fast and needs to be picked up fast and definitely if you wait for it will be gone. The slower movement of a 1x or, at an extreme, the erg doesn’t work well in an eight.

Mens rowing eight at the catch

To encourage an efficient and effective catch well round behind the rigger we spent time with some of my favourite exercises, inside arm only, outside arm only with the inside hand on the backstay, and hands together on the handle. Once the catch was working better we moved on to getting the rowers to move out of the catch sooner and with more spring and acceleration. For this I used an exercise that’ I think, was developed by Harry Mahon. Two rowers row just the front 10cm of the stroke and when they have this sorted they move to row 10cm then let go of the handle and collect it again at the finish. This requires a good initial leg push to get some way on the boat.

After this we had the whole eight doing frontstop 10cm rowing segueing into full strokes. The sequence seemed to work well and the eight was moving better after the exercises. I was happy with how the boat was moving and would have been equally happy if it was a New Zealand crew.

Posted on March 26, 2013October 22, 2020 by Rebecca Caroe
We got a question in from the Captain of a student rowing club “How do you deter your… read more

Posted on July 28, 2012October 28, 2020 by Rebecca Caroe
Watch out for @Ben_Rodford who’s blogging this one for us… later Heat 1: South Africa, Denmark, Switzerland, USA,… read more

A bottle too far? Guest post by Barrie Robinson

Posted on August 4, 2011October 23, 2020 by Rebecca Caroe
One of the ways to slow down a racing shell is to add weight.  As races are sometimes… read more