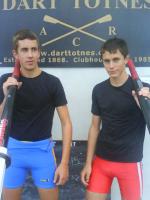 Rowperfect UK is supporting two junior boys from Dart Totnes Amateur Rowing Club . They have high ambition to race for Great Britain and we are loaning them some Drehers to use in their training and racing.

Meyrick Tooley and James Lovering, are both 16 years old and have trained and raced together for three years now. Heres how they describe their rowing background:

Our coach is Will Hawkyard from Dart Totnes Amateur Rowing Club, and we train regularly on the River Dart in Totnes, Devon.We have been racing for the past three years in a double scull, and have recently started racing in a coxless pair. This year we won a bronze medal at the Junior Inter Regional Championships, and last year we won a silver medal at the National Rowing Championships. Over the last 2-3 years we have been unbeaten in the South West rowing region, and narrowly missed gold medals at a couple of regattas further afield such as Gloucester sprint regatta.

Here is their first update since receiving the Drehers .

We have only been in our pair a few times as our boat has been taken away to Henley veterans regatta by some veterans at the club. However the Dreher blades are amazing, we tried some side by side racing with another pair at the club and the blades are a lot smoother than our clubs concept2 big blades, we are both really excited about racing with them in the near future!

Yes we are doing Nat Champs, but in the j16 double as the boat has been away so we havent had any solid training in the pair leading up to this weekend.

As you may know we raced in the double at Marlow regatta, we had a solid race finishing 3rd. We finished in a time of 7:06.57, only about 5 seconds behind the winners who recorded a time of 7:01.46, and about 2 seconds from 2nd placed Nottingham, who finished in 7:04.10.

The following weekend we competed in the GB / FRANCE selection trials. In our double we were seeded in the slowest heat as we did not participate in the Nat Schools, however in this heat we finished 2nd in a time of 5:14.1, earning us 6th position overall.

As the boat has been absent from the club, we have been training mainly in crew boats, as soon as the Nat Champs are over and done with we plan to move into the pair and singles until November. In the next update I will include a few pictures of the pair in action!

Coaching – setting the stroke up from the finish

Posted on June 25, 2013October 20, 2020 by Rebecca Caroe
New Zealand international coach Calvin Ferguson sets out his ideas about how to set up the stroke from… read more

Posted on March 9, 2012October 20, 2020 by Rebecca Caroe
Here’s your weekly opportunity to enjoy tales from others who also love rowing. This weekly round-up is for… read more

New rowing e-books – some are free!

Posted on May 16, 2011October 23, 2020 by Rebecca Caroe
Rowperfect has started to publish e-books about rowing.  We have always supported excellence in rowing and sculling technique… read more