In April 2020, Lia Ditton will set off from Choshi, Japan, to row solo and unsupported across the Pacific Ocean. If she is successful, she’ll be the first person to ever achieve it. We spoke to Lia to her about her training so far and how she’s preparing herself for the expedition of a lifetime.

“I will acknowledge that I am afraid. I am not afraid of sharks or waves the size of buildings. As a licensed captain, experience has taught me what to expect of these. I am afraid of pain, physical pain.”

<>In April 2020, Lia Ditton will set off from Choshi, Japan, to row solo and unsupported across the Pacific Ocean. If she is successful, she’ll be the first person to ever achieve it. We spoke to Lia to her about her training so far and how she’s preparing herself for the expedition of a lifetime.

Lia, How did you get into ocean rowing? How did it all start for you, crossing the ocean?

A Danish Olympic rower was given my number by a mutual friend. ‘Me? Row and crossing the ocean? You haven’t even met me!’ I still laugh at the memory of my phone call with Lisa Kronenberg. I started reading books about people who rowed oceans – there were a total of 8 on the subject at the time. I became fascinated.

What initially made you want to attempt a solo crossing of the Pacific?

I met a man who had just completed a row of the North Pacific with a rowing partner. His rowing partner said the crossing couldn’t be done solo. Two French men had come close rowing solo in 1991 and 2005, but both had been towed the last 20 and 50 miles respectively to land. This triggered something and I knew I had to try.

Can you chat to us about the boat that you’re going to make the attempt in?

My boat is a 21-foot ocean rowboat with a cabin at one end and a storage compartment at the other. I row on a sliding seat. I have a Katadyn desalination unit onboard, which enables me to convert seawater into drinkable water, a GPS antenna to determine my position and AIS (automatic identification system) to see other ships and for them to seem me. My YellowBrick tracker shows you where I am on my website and to communicate I use a Garmin InReach satellite device that enables me to send text messages using my iPhone.

What sort of training have you been doing in preparation? 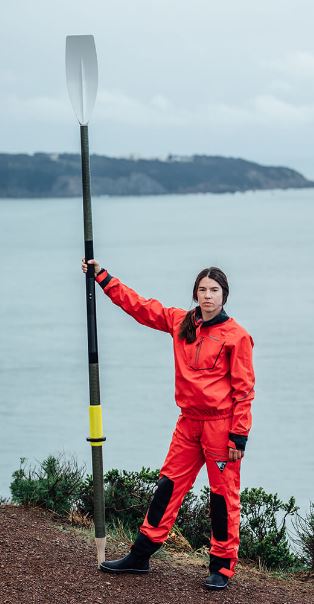 Lia Ditton: crorssing the ocean and ready for the torture

I try and do as much of my training in my boat as possible. Nothing beats doing the thing you’re training for! Off the boat, I swim once a week with a full-face mask so I breathe through my nose and train my diaphragm. I do Bikram (hot) yoga for a serious stretch and a minimum of 2 strength and conditioning workouts in the gym.

To date, I have rowed 2,067 miles in training. By the time I ship my boat to Japan, I am hoping to have rowed the equivalent of half the Pacific (3,000 miles). Time on the water breeds experience and with experience confidence develops.

What are you most worried about? Is it the storms and conditions you’re likely to face while crossing the ocean?

I’m not that worried about things when I’m out there as I’ve had a lot of experience to know how to deal with most situations. But not being able to do the row is what worries me the most. Either through lack of finance, bureaucracy in getting my boat to the start line or some other issue I can’t even imagine right now.

In terms of storms – they don’t usually appear out of nowhere, so I never find them something to be too frightened of. The sky changes, the waves build. Hopefully this gives you enough time to get ready. As the storm arrives, the important thing is to monitor how the boat is riding the waves and make frequent equipment checks. I have faith that my boat is designed to withstand the conditions. It’s hard to sleep, but even harder to eat and use the toilet bucket!

What would you say is the most important thing you’ve learned, that you’ll take with you into your attempt to cross the Pacific?

I have been through so many trials just to get to the point of departing on my trans-Pacific record attempt. Above all else, I have learned humility. Anything can and will happen and my job is to stay grounded and persevere through the storms and the calms.

And finally, what advice would you give someone, attempting an expedition like the ones you do?

A positive attitude is the most critical thing you need for all aspects of an expedition. With that, you know you’ll be giving it the best shot you can.

To read more about Lia’s attempt to row the Pacific, click here..Photographs by Charles Hambleton, Alex Sher and Christian Agha.

How to use video with your sculling crews – Part 4

Coaching a 4 on Rowperfect – case study

Posted on October 24, 2018October 6, 2020 by Rebecca Caroe
We were sent this case study by a coach.  It’s an interesting study in athlete skill acquisition. I… read more