Bad coxing starts with poor coaching.  Improved coxing comes from an understanding of the best way to instruct.  Few coaches have been coxswains and so take a quick educational guide from a Coxswain, Chelsea Dommert, who found that she was frustrated by the un-clear instructions she got from her coach.  So she wrote

the book on Coaching the Coxswain. 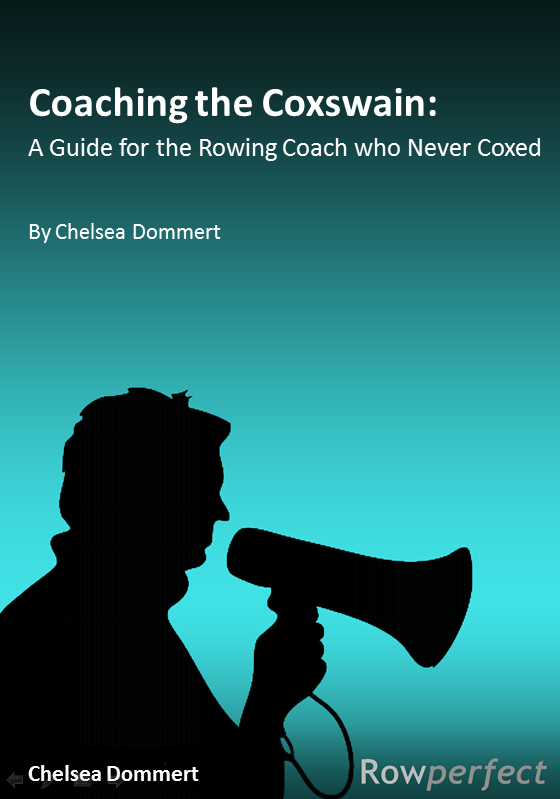 A guide for rowing coaches

As a rowing coach, you’re supposed to focus most of your time on your rowers. That’s normal and acceptable. But there’s a big difference between focusing on rowers, rather than coxswains, and completely ignoring your coxswains altogether.

When you actually spend time coaching coxswains, you can reduce the number of frustrating races you lose by at least half.

That’s half…at a minimum. Possibly more than half. Why?

1. Coxswains make half of all the race-losing mistakes on your team.

Let’s do a little visualization exercise: think back to the last time your boat did worse in a race than it should have done because someone messed up.

Stop. Actually close your eyes and do the exercise. Come on, 10 seconds.

How did that experience make you feel?

Remember how your heart stopped when you saw it happen?

Remember that heavy feeling in the pit of your stomach?

Remember how you wanted to ram your head against a wall?

When you give your time and energy to training a crew, it sucks to see one wrong movehurt its performance.

What if I told you that coaching just 15% of your crew could reduce the number of times that happens by half? 50% improvement for 15% work – a big win. Well guess what? That’s what I’m telling you. Look, I have numbers to support my claim:

It’s a D1 Ivy League crew. It’s a respectable crew. Therefore, I expect that the numbers are not abnormally high or anything.

*miscalled – I don’t mean she missed an opportunity to say the perfect motivational phrase. I mean she failed to call a lengthen after the high strokes and took the boat down the whole course at a 45. I mean she completely forgot to call the sprint or told her boat it was winning when actually it was not. I mean bad miscalls.

Look. Even though coxswains make up only 15% of my team, coxswains are responsible for 50% of those mistake-related losses.

By taking control of your coxswain’s basic training – by involving yourself in coaching her – you can eliminate these. Yeah. Eliminate them. Gone. Poof! Magic.

But you can do even more than that.

You can coach your coxswains to win you races that you otherwise might not win.

That’s because crews cannot make collective changes mid-race by themselves. There is only one person who can act independently to improve the performance of your whole crew in the thick of battle.

Exactly how many coaches spend time on their coxswains?

I don’t know the answer, but here’s a clue:

Of the coaches who I e-mailed about this article, 22% visited the blog more than once in 14 days. That 22% represents the portion of my sample population that expressed a continued interest in coaching coxswains.

This means that learning to coach your coxswains gives you a jump on 78% of competitors who don’t bother to learn that stuff.

Here’s another interesting statistic. Among the coaches who e-mailed me back about the blog, 67% of them coach for crews in the top 20% of their regional league. Their crews are the crews competing at the national championships.

Coaches at the top crews want more information about how to coach their coxswains.

You guys aren’t waiting for your coxswains to read books or take courses – you’re taking initiative to make your coxswains better. You know it’s important.

So the question is, what’s up with the 78%? Why don’t coaches spend time on coaching their coxswains?

Here are some reasons that I have heard from other coaches.

Let’s go over why these reasons suck.

Of course, if you want an easy-as-pie, step-by-step guide to coaching your coxswains up from their novice year, the book has you covered.

Posted on June 21, 2014October 21, 2020 by Rebecca Caroe
Glasgow2014 – If you really want to get involved with Women’s Sport during this summer’s Commonwealth Games –… read more

Rowing Technique in a Nutshell

Posted on December 5, 2016October 15, 2020 by Rebecca Caroe
Just doing some work on the Rowperfect archives and thought I’d share some technique links which may be helpful… read more