The OarRater coaches rating & stopwatch is now listed in the Rowperfect shop.

It’s a good value, simple to use product and suitable for club coaches.

The manufacturer sent us this picture of the OarRater rating stopwatch after he’d done an under-water test to demonstrate that it is water proof.  Pretty important for a watery sport! 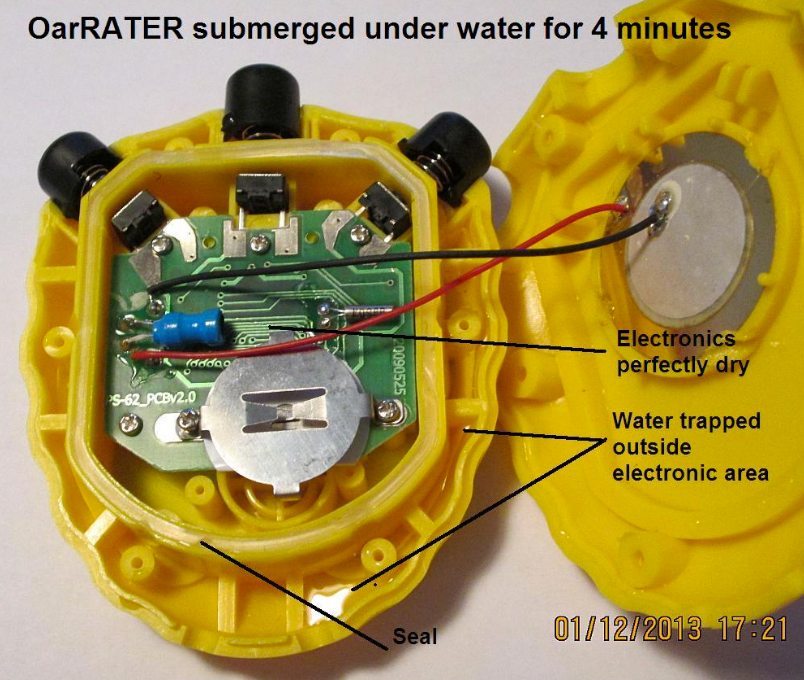 The ergonomics are right – it feels good in the hand. There is a sturdy cord, which is adjustable so it can be secured to wrist or neck. Operation does not require many more neurones that most coaches possess.  It was not immediately clear to me if each rate requires “3 pushes” and also what was the value being shown of the “continuous update” – an average for the piece or that last stoke?  A minute or two’s experimentation showed it to be the last stroke which, obviously, was what was wanted.

It will also do stop watch (1/100th but resets in 30 minute increments), time, date and alarm.

The unit is sturdy – a glance through the lens shows it to be about 3mm thick plastic and looks like it could be used as a football and still work.

The stopwatch has a 500m split mode, which the watch cannot recall but one cannot complain at that price!

OarRater replies “The unit updates after every press so as the rate changes so does the display by averaging the last three strokes.   While not claimed to be “waterproof” it has been thrown in a bucket of water fives times without any ill effects as it was designed to be waterproof – but Vectis does not claim that – just “water resistant.”

The OarRater is a fantastic alternative to the more expensive (and injury-prone) rate meter that currently dominates the market.

Sensibly priced, it does all that is required, with an easy-to-use and robust mechanism & clear and readable face. Rates are accurate and ultimately it does what it says on the tin. Other features are those that one would expect on a stop watch.  Rating?  Definitely 5 stars !

One thought on “Coaches – need a reliable rating stopwatch?”

More on the Worlds Capsize

Posted on December 6, 2006October 23, 2020 by Rebecca Caroe
Quote from a discussion on rec.sport.rowing about safety…. much about other stuff but some clear points of view… read more

How to keep my legs parallel when sculling

Posted on October 31, 2018October 15, 2020 by Rebecca Caroe
We got a question from a reader “How to stop the legs falling apart/ outwards at the catch… read more