We’ve found several statues with a rowing theme around the world and so as a little side project this summer, here’s one of them in the US city of Philadelphia.

With Boathouse Row and miles of challenging river, Philadelphia has long been a center for rowing enthusiasts. Who better to represent this tradition than Olympic champion John B. Kelly Sr., who won the single sculls in 1920 and the doubles in 1920 and 1924. A bronze sculpture of Kelly at the oars is located near the rowing grandstands. and here are some links if you want to know more. 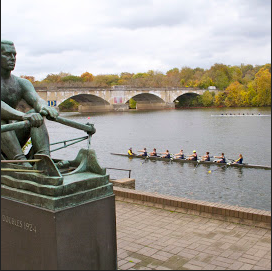 Dispel the myth – How Coastal Rowing can help

Posted on June 10, 2019October 14, 2020 by Tom Wall
Coastal Rowing is getting more and more popular. Many beginners wonder: How difficult is coastal rowing. What are… read more

Can you donate boats to help a start-up club?

Posted on January 12, 2015October 21, 2020 by Rebecca Caroe
We got this message from a new reader, Stefan Stavrev from the Aquatica Ohrid Rowing Club in Macedonia asks. Dear All,we… read more

Posted on October 21, 2011October 22, 2020 by Spring
Even the sport of rowing is not immune to colourful fans – you know the ridiculous costumes sported by fan(atic)s… read more