How Joel Skaliotis, coach got his crews training on RP.

A few years ago, I was the ED at Brookline High School, near Boston. I spoke to you several times back then (2010-2012); I had a bunch of older RPs, and then some prototypes of the RP3 that Carlos Dinares had sold me on discount. I was able to get a mostly working 8-man configuration going in the basement of our high school for our junior program.

Now I am the ED at Norcal Crew, a junior club in California. I want to start using RP3s for training out here, as well, and plan to start buying 1-2 per year, as our budget permits.

In Boston, we spent four months indoors, either rowing RPs or CII ergs on sliders. With so much time on land, the quality of our strokes was really important. Now, we are on the water year round, and I hope to use the RP3 more as a technical tool, to help athletes with disconnects in their strokes be able to work on it with more feedback. Often in Boston, we would put the curve of an elite LW on the screen, and then work through changes with them that would bring their force curve more in line.

Can rowing boats go any faster?

Posted on November 1, 2018October 15, 2020 by Rebecca Caroe
Two lessons from the world of cricket caught my eye. The first discusses whether the fastest cricket ball… read more 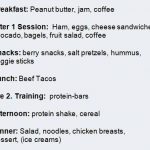 Daily menue of a top athlete