Guest Post from Pauline McGovern on the selection process for the GB Rowing team.

Being a six foot tall, sixteen year old girl makes me stand out.I was noticed several months ago as a potential athlete within the extended Great Britain Rowing team.

I was utterly stunned when the “Tall and Talented” programme which is designed to identify men and women aged from 15 to 21 who have the body and mental compatibility to become an Olympic athletes in rowing, accepted me in to their scheme.

I have been living in the shadow of my older brother who is 6ft 7 and infuriating as he is always good at anything he tries. But I felt that I had something to offer when I applied for a place on the programme and was asked to attend a testing day. My older brother hadn’t bothered. It made me feel superior to him as he had always beaten me both academically and in sporting events. This was my first victory.

A thick envelope arrived in the post eight weeks after my testing day. I turned it over and noticed the words GB Rowing stamped on it. My heart began to pound against my ribs. To my utter astonishment it told me that they had been impressed with my test results and invited me to a further testing weekend camp in Nottingham in three months time. Those three months turned not only my life but the lives of my parents and peers upside down. I needed to be fitter and faster. At this time I didn’t only shock myself but those around me. My fellow rowers saw my attitude to rowing change and my friends noticed how focused I had become. Even my parents found themselves with a far more mature and dedicated daughter.

The testing camp took place in the Easter holidays. During the journey the insecurities in my head taunted me. What chance did I have? What was the point in wasting everyone’s time and effort? I know now that those insecurities I felt and overcame made me a stronger person.

My first impression upon meeting the rest of the potential athletes was that I was in the land of giants; I was one of the smallest rowers.

I was not nervous but excited. I belonged there. All the parents left their petrified children in the hands of the coaches who sent us back to our rooms. When I found I was sharing with two other sixteen year old girls, I began to relax. These girls weren’t twenty something fitness freaks but two normal girls who were as astounded as I was to find themselves thrown into the middle of GB Rowing.

We asked each other questions about each others lives and slowly I felt a closeness being formed as we began to mention our height and the difficulties that come with it. I had always believed that because my height made me look older I was obliged to act older so had matured earlier than my peers. They readily agreed and we began to swap stories. I had never before felt so understood. Our discussions then turned to the next day. Test day. We were all nervous and we all knew we would have to put our new found friendships behind us and see each other not as friends but as competitors.

The tests were designed to see how far we would push ourselves and how we would deal not only with the physical exhaustion but also our mental capability of being pushed out of our comfort zone. I had shut my mind to outside distractions and convinced myself that although the girls around me were lovely company they were fighting against me for a place with GB Rowing.

Everyone was tested on rowing machines for their strength and endurance. Both of these tests held no concerns for me since I had been preparing for this. I knew I could do this. In preparation for the test I began to ignore my surroundings. I was able to visualise wining. I could feel my desperation to beat them. I remember finishing my piece, knowing that I had pushed my body further than ever before.

The final test was the one I had been dreading, a test till exhaustion, to see how I could deal with the pain barrier. The test was on a “shwimm” bike that uses your arms as well as your legs to produce power. We were told to increase the pace every minute and continue until we dropped. I knew I couldn’t just come off the machine, I had to fall off. I was going for gold. I needed to be the last one remaining to demonstrate I was serious and was ready for GB Rowing Start Program.

The test started. After a few minutes a couple of people fell away then a few more. This was hard, my shoulders hurt, my arms hurt, my legs hurt I was no longer looking at the other competitors my concentration was on the rate meter.

It was just me and the machine. Each minute we had to raise the rate by 5rpm, each minute it got faster and harder, each minute energy drained away quicker.

All I had to do was keep going but I had forgotten how to breathe. My lungs ached, I was gasping for air but I literally couldn’t get enough. In the distance I could hear a coach saying that I had to stop as I couldn’t keep up with the new pace. I couldn’t see properly. Black rings surrounded the edges of my vision. I stumbled off the machine with legs like water. They couldn’t take my weight. I had to sit. It wasn’t for another minute that I noticed I was crying. I was confused and it was the only way to vent my emotions.

After all the tests were completed the athletes attended lectures on the working of world class rowing and the commitment expected if we were successful. It was then it hit me. I couldn’t believe what had happened. I had never paused to think about what was really involved. I was excited but scared. I realised the serious dedication, sacrifice and hard work involved. This was serious, this was for the Olympics 2016.

At the very end of the camp I found myself hugging girls I had met only days before and genuinely feeling sad that I might possibly never see them again. I felt that even though our only connection was our height and the chance we had been given we had all put ourselves out on a limb and exposed our vulnerability which brought us together. I knew that, like me, they would stoop at school to blend in, attempting to look average and hide who they really were.

We were the same even if we came from all areas of the United Kingdom. As I curled into the backseat of the car to meet my worried parents I found myself smiling.

We had been told we would find out what the next step in our rowing careers would be in two weeks. It felt like two months. The envelope arrived and once again I found myself in the kitchen clutching the letter and trying to build up the courage to open it. I read it slowly wanting to savour the moment of truth. When I finished, I placed it face down and looked to my parents’ eager eyes. With a blank expression I slowly moved closer to them, I grabbed both into a tight hug and began jumping in the air “I did it! I did it! I’m through” I squealed. It is that moment that I want to remember forever.

That excitement of being granted this chance makes every tough session worthwhile. It reminds me of what I am trying everyday to aim for and on those early sessions when I wish, like a normal teenager, I could have the luxury of sleeping late, I think about my ambition. I now train seven days a week for a total of fifteen hours. I need to be totally focused on my training, realising that it keeps me not only physically alert but mentally too. I feel such a surge of joy when I’m training with the GB Rowing team, knowing every session could bring me closer to the Olympic podium.

One thought on “The Big Friendly Giants” 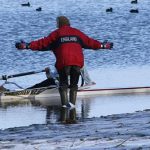 Posted on April 16, 2020October 14, 2020 by Bryan
Three Rowers Who Became Famous Rowing is not a very popular sport and many people have only a… read more

Free shipping till Sunday – get cracking

Posted on December 10, 2014October 22, 2020 by Rebecca Caroe
Get on with your Christmas gift shopping and take advantage of Rowperfect’s Free Shipping Week in our online… read more

GB Junior Coaching Conference – Get the tips they’re getting

Posted on September 30, 2018October 14, 2020 by Spring
Our friend Bruce Grainger is speaking at the GB Junior Coaching Conference on September 24/25th in Slough, Berkshire,… read more