There are thousands of regattas in the world with as many rowers. But there was only one Armada Cup. It was where  the “big ones” rowed alongside fitness and recreational rowers.

The regatta was unique:

All registered competitors started at the same time and plunged into the calm waters of Wohlensee near Bern in Switzerland. A mass start is difficult. As a participant, you ask yourself where the best position is. Of course I let the world-class rowers go first. But I didn’t want to jeopardise my own starting position. Mass starts also have a higher risk of capsizing. But then you got going past sandbars, swans, herons, to the finish line nine kilometres away. 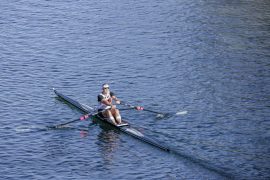 Mahé Drysdahle in the Skiff at the Armada Cup

Rowing in the skiff

About 500 singles (skiffs) registered in 2018. There were top athletes and amateur rowers from all over the world. They all opted for the ambience with curves, sandbanks, seaweed and international opponents. Many top athletes including Mahé Drysdahle, the Sinković brothers and Emma Twigg have rowed and won at the Armada Cup.

Wohlensee is not an easy lake for rowing. There are two local rowing clubs and once you have rowed on this lake, you know its pitfalls.. Sandbanks are a regular occurrence. Even if you do not suspect sand, it always appears when you least expect it. 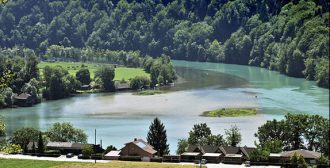 Swans also reside on the Wohlensee, and are not always very welcoming of rowers in a hurry to reach a finish line.

The program of the last Armada Cup:

The 2018 Armada Cup had three events:

Thomas von Burg, President of the Organizing Committee, said, “… it will be a great occasion again in 2018 and we will celebrate it duly. To give our thanks to athletes, organisers and sponsors we will celebrate with a party after the race “.

Posted on May 28, 2015October 28, 2020 by Rebecca Caroe
Are you looking for ways to improve your rowing and sculling technique? Our next RowingChat guest – Rosie Mayglothling… read more

Welcome Scott Frandsen on this month’s Rowing Chat: listen to the legend

Posted on January 22, 2013October 23, 2020 by Duncan Holland
Part of my lazy Christmas period was spent reading  Malcolm Gladwell’s  Outliers. A fascinating book, as all of… read more