View all posts from Spring Cutter 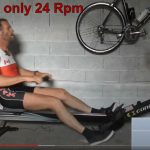 Cardio Exercise: Legs only on your erg

Posted on April 21, 2020May 21, 2021 by Tom Wall
Today a contribution from our coach Jean-Pierre. This exercise on the ergometer can be performed at home or… read more

A personal tribute to Dan Topolski by Chris George