It seems that after decades of celebrating the insensitive hard-nosed coaching style, the world of professional high-performance sports is finally coming to its senses and realizing that the persona it once celebrated as the model for coaching is not only destructive for athletes, but also limited in its ability to motivate and inspire them.  (Rowperfect is reposting an article which irst appeared on Jason Dorland’s blog)

If you recall Hollywood’s depiction of the Italian Stallion’s coach, Mickey, screaming at Rocky ringside, “You’re gonna eat lightnin’ and you’re gonna crap thunder! You’re gonna become a very dangerous person!” you’ll understand how we’ve held onto the notion that in order to be successful in sports as a coach you must be aggressively combative. Hollywood aside, our culture seems to have had a long love affair with the idea that successful coaches are ornery and abusive.

However, thanks, in part, to head-coaches like Pete Carroll of the Seattle Seahawks and Mike Babcock of the Toronto Maple Leafs, that old-school style of coaching is slowly dying a long overdue death.

When coaches refer to the sign outside of their training room, “Hang your baggage at the door!” as a strategy for dealing with athletes who are having difficulty focusing because of intense emotions, it conveys the message that those emotions are not only unwelcome, they’re also wrong.

A few weeks ago, I read an article that showcased exactly the shortcomings of a coaching style indicative of this approach. It was an interview with two older gentlemen who have been coaching US Collegiate baseball for over forty years. The message was that entitlement was the biggest problem with young collegiate baseball players today. Fair enough, I get it. I’ve coached my share of athletes who’ve shown up on the first day with only one concern—themselves. As coaches, we’ve all been there.

However, I took a different message from that interview. What I saw as the problem was an older generation of coaches who couldn’t be bothered with trying to adapt to a younger generation of athletes. These two coaches were used to and obviously quite comfortable with athletes who kowtowed to, “Because I said so!” as an acceptable answer to all of their athletes questions. For today’s athletes, that’s just not good enough—and nor should it be!

“If coaches want to extend their shelf-life and remain relevant in the lives of their athletes, they need to adapt.”

That means learning how to work with their athletes on every level—including all of their emotions—positive and otherwise. That’s where Carroll and Babcock have capitalized with a coaching style that is more welcoming of the whole athlete—not just the physical.

Carroll refers to it as relational coaching where the whole premise of developing high-performance in individuals is built upon the foundation of a relationship between two people. Only from that place can you explore the possibility of that which an athlete is capable.

Clearly, he’s a coach who has understood from his early days of working with high-performance football players that when you allow the individual athlete to express who they are as a person as well as an athlete and then celebrate it, only then do you create the necessary environment for that person to grow and shine.

Babcock, recently anointed as the new head-coach with the Leafs, would concur. This celebrated NHL coach, in his first press conference with the Leafs, stated that in order for his new players to reach their full potential his number one job is to create a safe environment for the players—and he’s not just talking physically! Mike has built a reputation as an athlete’s coach. One who, like Pete Carroll, understands that you can’t beat high-performance out of someone—you have to coach it out. That means taking the time to nurture the non-physical part of the individual—the intangible emotional part.

Sure, some days I can appreciate the attraction of just coaching the physical mechanics of an athlete—void of those other components. Create the physical stimulus and allow for the physical result—a coaches dream, right? As we all know, for obvious reasons it doesn’t work that way—and, thank goodness! Because I believe it’s in that intangible emotion that lays the greatest opportunity to inspire our athletes to their highest potential.

Some coaches see “the package” that all athletes arrive in as a hassle to be overcome. Where after breaking down that package into sections, only then can they begin to coach the physical. This approach not only creates an unreal and unsustainable environment, it also ensures the coach misses out on that huge opportunity to inspire true greatness.

THE OPPORTUNITY: beyond archaic coaching

When coaches realize that the relationship with their athletes is the conduit through which all of their athletes and teams perform, they begin to see the opportunity that awaits them. Where emotions aren’t something to simply be quashed or tolerated, but instead nurtured as the individual moves along their athletic journey.

So often when I work with other coaches or present at conferences, I hear coaches refer to developing a relationship with their athletes first as a “soft approach.” That somehow, they need to be distant and cold with their athletes if they are going to garner the respect and efficacy they desire. To those coaches I would say, “Just try it—you’ll be happy you did!”

As a high-performance coach, I see this methodology as THE MOST EFFECTIVE high-performance strategy there is, period. I’ve seen it work too many times. Where teams that are perhaps less talented on paper outperform other more talented teams. How? One word—culture!

When the culture of a team is built around a healthy relationship between the coach and their athletes—only then will the skill, strategy and other traditional components of competition develop and reach their highest levels of achievement.

Nonetheless, performance and outcome aside, perhaps the bigger take-away for us as coaches are the relationships themselves. When I reflect on my own coaching career—yes, the victories are highlights, but the relationships that I continue today with those athletes mean more to me than the trophies and medals they won. Cliché, perhaps. But, make no mistake, both the championships my athletes have won and the relationships I hold with them today are byproducts of the culture we built. Besides, if it’s good enough for two of the best coaches in professional sports today—then, my guess is, it’s probably good enough for everyone!

Jason Dorland blogs and is available for hire as an expert rowing coach.

One thought on “Say Goodbye to Archaic Coaching Styles!” 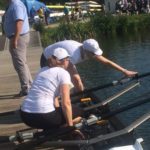 Posted on March 26, 2019October 13, 2020 by Rebecca Caroe
We have just formed a mixed quad crew and want some advice on how to align our power… read more