I am now coaching a University team and while getting them ready for the big races of their season, I pulled together some thoughts on coaching coxswains.

This is an edited version of what I sent to the group.

Leading up to the University races, the principal job of the coxswain is to assist the coach in bringing the crew together, getting them rowing well and executing the coaches instructions on the water.  So you are steersman, in-boat coach and trainer all in one.

This means that you need to be prepared every day.  Think of yourself as the person in the crew who knows the answers to anything a crew member might ask

Ask for coaching for yourself – from the crew and from the coach.  Discuss which calls work, which were not so good.  Find out why.  The crew is in a good position to tell you how to improve your calls. If you didn’t train with the crew in the previous outing, speak to them before going on the water to find out how that outing went and what they want you to learn from it so you can continue good things into the next outing.


Here are some other things to think about:


The crew as a whole cannot see you so your strength is your voice and the manner in which you deliver your calls. Vary the tone and intensity of your voice e.g. If warming up then getting into UT2 rowing you would talk and encourage with a tone that is suitable for the work piece and if carrying out 3x2km pieces at race pace you would be more assertive and demanding and direct with your calls. There would be a sense of urgency in your voice. Experiment to find out what the crew likes and responds best to.

All crews are different so be flexible as you may need to vary your approach to get the best of 'YOUR' crew! 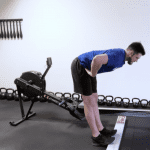 Teaching how to hinge from the hip in rowing

Posted on June 7, 2018October 28, 2020 by Rebecca Caroe
For coaches one of the most challenging techniques to teach to athletes is improving the body over position… read more

Does Alcohol Affect Your Rowing?