Rowers World is a great US discussion board for our sport. A thread was started on the theme Should I raise my heels at the catch. And as it meandered along… as these things do…. this interesting comment was made by old timer who describes himself as an engineer.

Well yes, the glutes may be the strongest muscle group but that is only
a small component of the point in question. Take a look at https://www.rowperfect.co.uk/wp-content/uploads/2006/10/Rowperfect%20Cas%20Rekers%20paper%201993.pdf to see force vs time graphs for the rowing stroke. Note

Firstly, the maximum force is in the region of 1000N, which is in the
region of the same as the weight of the rower. This is not a BIG force,
and considerations of which muscle groups are strongest are not
necessarily of primary importance.

Secondly, Newton tells us that the impulse, the area under the
chart is proportional to the change in momentum, i.e. we can increase the
change in momentum not only by making the peak higher, but also by
broadening the peak of the force time graph. Thus any work done is good
work, it does not have to be performed at peak force to count. – like
Swiss says, its a concerto of all the muscle groups.
Thirdly, peak force does not occur at the beginning of the stroke, thus
using the strongest muscle group to initiate the stroke may not be good
conducting of that concerto.

Having agreed wtih his comments, I would add that in coaching I find it very hard to teach athletes how to activate their glutes.

Posted on January 24, 2009October 26, 2020 by Rebecca Caroe
Image by The Library of Congress via Flickr How to produce a high performance novice Study the influences… read more 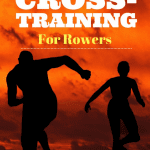 Cross training for rowing in the winter

Posted on December 7, 2016October 15, 2020 by Rebecca Caroe
It’s time… the weather closes in and days on the water get limited by wind, rain and in… read more

Posted on August 9, 2008October 29, 2020 by Duncan Holland
Duncan Holland writes; I watched the first day of the rowing this morning, what a day for the… read more