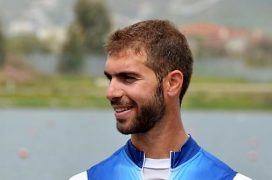 This month we’re welcoming an Olympian and world competitor in both flat water and ocean rowing.  Nikos is well known as one of the identical twins who have raced both lightweight and heavyweight for Greece from 2004 to 2012 winning European and World Championship medals.

Nikos sought a new challenge after retiring from international competition and based on a chance encounter in Auckland New Zealand airport with a lady who was a coastal rower, he and his brother decided to switch tack and go to coastal rowing.

Since then Nikos founded the first exclusively coastal rowing club in Greece, called ‘COASTAL ROWING CLUB OF THESSALONIKI’  in partnership with the Friends of The Sea Yachting Club.  Since 2014 he has been coaching a squad of 80 people aiming to show the public the unique combination of fitness and recreation which coastal rowing offers.

Nikos will give a memorabilia t-shirt from the Thessaloniki Coastal Rowing Club in our monthly prize draw to subscribers of the Rowperfect Newsletter.

Posted on June 12, 2012October 28, 2020 by Rebecca Caroe
Join the newsletter list and you’ll be in the draw for this month’s prize Anna Railton’s poster “The… read more

Posted on October 23, 2018October 6, 2020 by Rebecca Caroe
Ways to enjoy Henley if you’re not there in person. Follow the Facebook crowd.  The HRR page is… read more

Posted on October 28, 2011October 22, 2020 by Spring
Even the sport of rowing is not immune to colourful fans – you know the ridiculous costumes sported by fan(atic)s… read more