And so it came to pass that I got to go rowing again. And it was good.

I woke up. Looked out of the window. Dark. Put lights on The Bianchi (the Peugeot has been retired for the winter). Hit the road. Enjoy dawn breaking over the Fens. Nice.

This scene would be more idyllic if I had remembered which bike I was riding. UNFORTUNATELY I forgot that this bike has (1) no gears and (2) no ability to freewheel, having spent the last 4 weeks pretty much solidly on a bike with both of these talents.  So, about 100m from my house, I tried to freewheel over a speed bump (everyone does this without thinking – it’s some unwritten rule of cycling).  This is physically impossible as both of my feet are attached to the pedals, which are both spinning in sync with the back wheel. Result?  I was inches away from completely tanking it into a bollard.  It’s fine.  It’s dark.  No one saw.  No harm done.  The Bianchi was clearly thinking a little less of me at this point.

“I am a track bike, Anna.  We do not believe in free wheeling. It is sick and wrong”.

A little bit of dignity lost, I continued on. 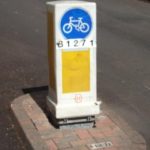 Look at it all lit up and with a bike warning sign. SMUG.

(Incidentally, taking a photo of a bollard in the middle of the day gets you some really odd looks. I do not recommend this activity.)

Lalala. Cycling along.  No sound but the hum of the wheels on the road (no noisy rachet-y free wheel hub you see?  It’s like a ninja bike – can’t hear it coming at all :->)  Leave Cottenham, into the first bit of exposed fenland.  Wind picks up.  Head wind.  Great.  I reach down to flick the gear lever under the brake to get my cadence up.  WHERE IS THE STUPID GEAR LEVER? HOW CAN A GEAR LEVER SIMPLY FALL OFF? Sleeping birds are woken by my rage and scatter.  I PAID GOOD MONEY FOR THIS BIKE! HOW DARE IT BREAK ON ME?  STUPID, STUPID BIKE! <VARIOUS CURSING>

If bikes had the capability of listing themselves on eBay in some sort of cycling-adoption-I’m-embarassed-by-my-owner scheme, mine would’ve done so by now.  (It’s fine, it doesn’t know my passwords. Ha! Take THAT bike!)

So with only two cases of mind-numbing stupidity and just one near-death experience, I make it to Ely.  Never before has anyone been so incredibly pleased to see an old porta-cabin (and old porta-cabin toilet block no less – Isle of Ely rowing club isn’t exactly the most well funded boat club in the world.  There’s not even running water!)  Did yoga on the grass by the landing stage and actually impressed the others when they arrived with my now more than passable hamstring flexibility.  Woo!

Got boat out of its boat bag and was relieved to find that it hadn’t dissolved or turned green. (I made the mistake of cleaning it with Cillit Bang before packing it up again before the break. Do NOT do this. Barry Scott is a massive tool.  It apparently discolours boats – although it did get it very clean very quickly – stick with T-Cut and elbow grease).  Admire the nice shiny yellow boat for a bit.  There is just something about the shape of a racing shell.  Everyone else has boated by now.  I get my act together and, finally, go rowing.

I suppose you’re all dying to know if the yoga has helped at all 🙂  Well, I can honestly say it hasn’t helped my catch timing in the slightest. How disappointing. B ut then this is yoga and not magic.  It however has improved my posture a bit and the increased hamstring/hip flexor flexibility means that I find it much easier to get a better catch position, even if I then never put my blades in the water when I get there.  A lot of the poses in the book are all about balancing your own body weight.  Roll ups et al. felt much more… balanced?  It’s amazing how bad I was initially at, say, doing this: I’m now much more aware of balancing my own body weight, and although I’ve clearly got a way to go with this yoga malarky, changes are being made.  Pleasing.

ANNA IS ROWING ALL OF THE TIME SO HAS NO TIME TO WRITE.

Getting back into the swing of things again.  Normality is certainly returning to my room – the drying rack is now full of one-pieces instead of * gasp * normal clothes and the laundry basket is, well, pretty horrible.  The number of times I listen to Pendulum has been increasing exponentially.  My heart rate monitor is now permanently attached to me.  I also had one of those mornings today where you are so addled you have to talk yourself through stuff.  All I can remember is the overwhelming need to DRINK REALLY STRONG COFFEE and the fact that I had to get on a bike for some reason.  I’m also craving cereal again. Big time.  Which brings me to my tower’o’cereal.

I made the classic mistake of going to Sainsbury’s hungry, but did make a list to stop me buying 5kg slabs of bacon or something stupid:

I returned home with this, and just this:

Also, there are only baskets in the Cambridge Sainsbury’s, meaning I was walking round the store balancing a stack of cereal boxes that was taller than my head with one hand while carrying a basket full of apples.  The cycle home was fun too. In my defence, there were lots of half price offers (£1.23 for 600g of Cheerios? Yes please!).  And I was being indecisive.  However, I was disappointed to find out that Shredded Wheat no longer declare “Bet you can’t eat three!” on their packaging.  This upset me as I always could (easily) eat three and then could feel a little smug for a while feeling like I’d outwitted the people at Nestlé or something.  (And yes I know, ploy to make you buy more cereal etc. etc.)  And due to there being NO BASICS BRANFLAKES I now have Chris Hoy staring at me, telepathically telling me to STOP WHATEVER YOU’RE DOING, GET ON A TURBOTRAINER AND PEDALPEDALPEDAL.  Brilliant.  Not only can I not outwit Shredded wheat any more but I feel guilty eating branflakes because at that precise moment in time I’m not exerting myself in any way.  That is why you should buy own brand stuff.  Cut out all of this nonsense. Chris Hoy’s thighs are fantastic though: 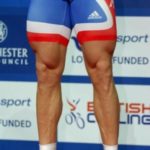 Anyway, I appear to have digressed * quite * a lot, so should probably wrap this up before I lose any more readers.

Result! I’d really like to be able to get my palms flat on the floor when doing this. That lycra also appears to be fluorescing.  Odd.

Even more odd is that I managed to spell “fluorescing” without getting told off by red underlining.

Can put legs behind head? Like an inch off it!  Give me a couple more days… 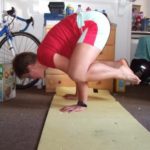 I hope you appreciate how difficult that was to take with the timer on my camera.

Lesson of the week: Don’t ever recommend tyres to a friend saying “Oh these have been great! I’ve not had a puncture in like 3000 miles!  You * will * get a puncture the following day.  It’s cycling karma.

It would also appear that spiders are the new wasps.  Perhaps wasp season is over (or the entire population died flying into my window repeatedly), but haven’t seen another one since I wrote complaining about them.  However LEGIONS of spiders have set up camp instead, but they seem much better at not dying, which is nice.  That and some fairly big green insects that I think are grasshoppers.  It’s good though, because repeated exposure to these things now means that I don’t run and get a boy shouting “Kill it. KILL IIIIIIIT!” if there’s a spider in my room any more.  I just ignore it and leave it to get on with what ever exciting things spiders have found to do on my ceiling.  I like to think they run an underground crime syndicate or something.